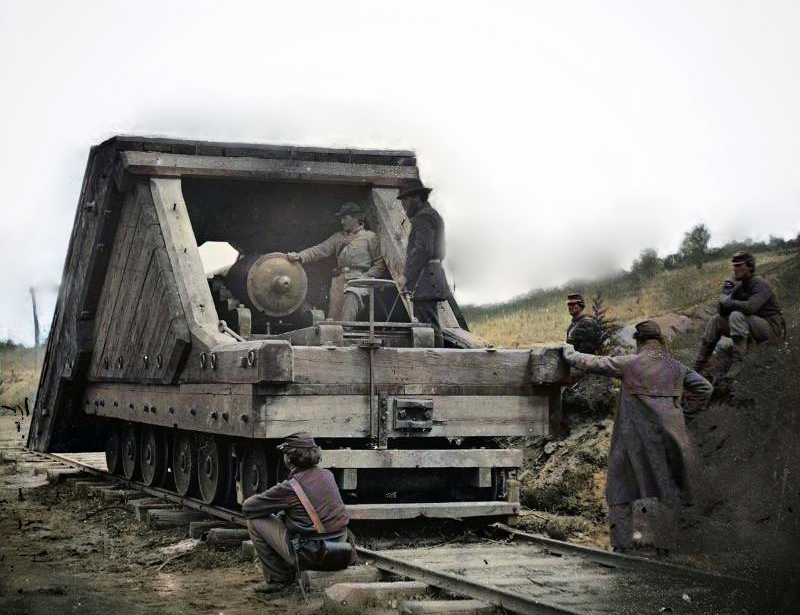 The roaring sound of a passing train may feel commonplace today, but there was a time when the introduction of locomotives represented cutting-edge technology with consequences that would affect every aspect of American life, including the American military. There’s an abundance of interesting — and often underappreciated — facts about the evolution of trains, but their development in America has had massive impacts on our nation’s military, many aspects of which continue to this day.

A Modern Military Built on an Industrialized Economy

Historically, the steam engine was essentially a British invention, but Americans would soon lead the world in advancing and making use of the technology. Steam had powered mechanical devices in various ways for hundreds of years even before the rise of the steam-powered locomotive, but the first power source to propel wheeled transports on railways was usually a horse.

The word “train” may feel like a misnomer when we’re talking about a machine that looked less like Thomas the Tank Engine and more like an oversized mine cart, but this was indeed the situation for many years before the rise of popular steam-powered locomotion.

British engineer Robert Trevithick built the first steam locomotive that ran on rails in 1803. By 1825, a steam engine eventually referred to as “Locomotion,” became the world’s first public passenger steam train carrying 450 people from Darlington to Stockton, England. From that point, this marvel of technology would quickly advance in terms of both engineering excellence and widespread popularity. Again, what began as an English creation quickly became an American icon as it was embraced in the New World and further innovated with the same pioneering ambition that would raise skyscrapers.

The vast and rugged land of the United States, as it was circa 1830, was filled with resources and possibilities, but this wealth of potential also came at a cost… which was distance. Citizens of various states felt quite separate from each other much of the time, in part, because geographically they were.

With such a wide scope of land, which was often untamed and mountainous, the relatively sparse population did little to fill the wide gaps between cities, and even the best of roads had the limitations and vulnerabilities of traveling by horse or on foot. The capacity to move a huge amount of weight over such distances (without canal or ship) amplified what was possible for trading, provisioning, and other logistics. The might of the American military would be fueled in great part by the power of its economy — and so much of what propelled the early American economy was powered by steam.

With the largest economy on earth by GDP, much of our military’s might has been made possible thanks to economic flourishing. Trains both represented and arguably ushered in a new era of American economic leadership.

Speed as a Source of American Strength

To protect a nation, mobility is key, and steam power is what initially made this possible in the U.S. The large-scale use of trains in war is perhaps the beginning of the American military’s dominance of mobility and logistics. While today’s Naval vessels and air dominance generally are more directly vital to our unchallenged leadership in military speed and mobility, trains were an original source of power, and they are still a crucial resource today.

In 1840, the U.S. had only about 3,000 miles of track. By 1850, America would have more than 9,000 miles of railroad track. Similarly impressive explosions of growth in terms of locomotive efficiency, popularity, reliability, and speed were taking place.

Despite the average speeds of early steam locomotives being equal to or less than that of horse-drawn counterparts in many cases, the ability to pull incredible weight and move without rest or sleep was an undeniable boon.

It’s clear that the explosion of train usage for supplying military operations, for economic growth generally, and for a populace to be as mobile as possible in a wide nation — have all been central to the impact these mammoths have made on our military as they’ve evolved and advanced.

In this clip from the Smithsonian Channel, several critical moments from the Civil War are detailed, highlighting how America’s growing railroad system played a pivotal role for both sides.

Unlike many vehicles, American trains have been less visibly involved directly in combat, but there are far more exceptions to this than many expect. In the American Civil War, it was not only supplies, logistics, and the movement of troops that made trains crucial but history (especially European history) is filled with direct fire both to and from trains of various models and types.

Both the North and South relied heavily on trains during the Civil War, but the North’s large manufacturing and industrial sector meant easier access to the material and expertise needed to quickly expand or repair locomotive operations on the fly.

As railway infrastructure problems grew more severe for the South, Northern forces exploited this weakness in various acts of sabotage, including the use of “Sherman’s Neckties,” which made use of heat to soften metal railways until they could be pulled out and bent around tree trunks, making that piece of railway more difficult and costly to repair than other sabotages.

Although America’s dominance of the air has meant that trains are relied on less to move troops en masse by railway like they were during the Civil War, trains have continued to serve as a vital piece of our logistical and economic framework.

Unlike trucks, which require far more fuel, a freight train can move each ton of cargo about 500 miles on a single gallon of diesel. This kind of efficiency is not only a boost to the logistics of moving military cargo to-and-from various bases it also helps in the maintenance and repair process. After all, many goods, especially complex machines like vehicles, may sometimes require specialized repairs or upgrades that are best provided at hubs located far from where they’re deployed or stored.

A Few Other “Military Trains” to Catch

Perhaps our military’s enduring emphasis on logistics as a core requirement for victory can be traced to a history of locomotive innovation. Now, America persists as the world’s leading military superpower thanks, in large part, to an understanding of conflict that places supply-chain concerns and economic strength as key elements of military strength.

The next time you see a train roaring by, especially a freight train hauling car after car of military tanks and other heavy equipment, think for a moment about its foundational and ongoing role in helping to facilitate the security that we cherish.

More Historic and Patriotic Events to Learn About: