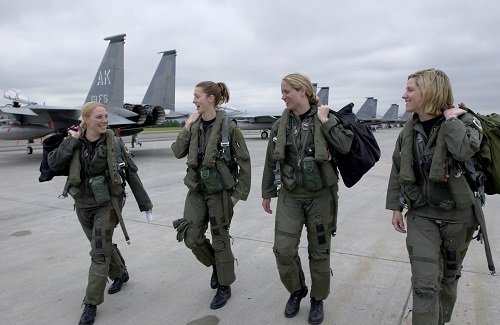 Moreover, International Women’s Day, which celebrates the strength and perseverance of all women from every corner of the globe, is today, March 8! What better day to commemorate all the great women that have served out country than today?! Join us as we take a look back at some of America’s greatest female servicemembers.

For most of our country’s history, women served the military in an extremely limited capacity, if they served at all. Throughout the 19th and into the 20th century, women only served in the army as support, working as nurses, surgeons, spies, mechanics, and cooks. Women could volunteer to help the military during times of war, but until 1901, there were no official members of the military, combat or otherwise. Then in 1901, the Army Nurse Corps was introduced, followed shortly after by the Navy Nurse Corps in 1908. However, women who wanted to fight for their country would pose as men in order to enlist.

Women wouldn’t become permanent members of the military until 1948 when the Women’s Armed Services Integration Act allowed them to serve in the military as permanent, full-time members. Until then, women could only serve during wartime. It took nearly 30 more years for women to be accepted into any of the U.S. service academies; in 1976, West Point, The Naval Academy, the Air Force Academy, and the Coast Guard Academy all welcomed women for the first time.

Another turning point came in 1993, when women were finally permitted to fly in combat missions and serve on combat ships. However, the Department of Defense still excluded them from serving in units “whose primary mission is to engage in direct combat on the ground”. This would remain the norm until 2013, when then-Secretary of Defense Leon Panetta announced that the military’s combat exclusion policy would be rescinded. The door was opened further for women when former Defense Secretary Ash Carter officially opened all combat jobs to women in 2016. In a statement that announced the change, Carter said “there will be no exceptions”.

Throughout history, the only thing holding women back in the Service has been the rules put in place to prohibit their involvement. Some of our greatest female servicemembers include:

More on Women in the Military from SpouseLink: