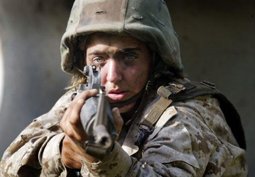 Women in the military do not want standards to be lowered to help them get into ground combat jobs, advocacy groups and servicewomen say.

“We don’t want unqualified women in these positions,” said Maj. Mary Hegar, a decorated helicopter pilot who was part of a lawsuit demanding the Pentagon open ground combat fields to women.

Advocacy groups say they want to avoid quotas or even placing pressure on commanders so that no one questions the qualifications of women who enter fields that had previously been closed to females.

“We’re not saying there needs to be a woman in every job,” said Greg Jacob, the policy director at Service Women’s Action Network, which has pushed for allowing women to enter the infantry and other ground combat jobs. “What we’re saying is if there’s a woman qualified, there is no reason a woman shouldn’t be serving.”

The Pentagon last month repealed the ban on allowing women into ground combat fields, such as infantry, tanks and artillery. The services have several years to complete the integration.

In response, the services said they were developing gender-neutral strength and fitness tests based on the requirements for those jobs, which include infantry, artillery and tanks. The tests may be administered to men and women as a way of screening men and women who want to enter ground combat fields.

The average Marine infantrymen, for example, carry about 100 pounds of equipment on their backs. They are expected to walk over long distances.

A member of a tank crew needs to be able to lift a 40-pound shell off a rack and place it in the breech of the main gun.

Female officers say it is important that those standards be met by women if they are to enter those fields.

“I don’t want to see the standards of military effectiveness be lowered,” said Hegar, who was injured when her medical evacuation helicopter was shot down in Afghanistan in 2009.

Still, some advocates have said the standards and tests being developed by the military may not accurately reflect what is required for the job.

“Why do we need standards other than what already exists?” said Lory Manning, a retired Navy captain and director of the Women in the Military Project.

“The question is whether those standards are rooted in requirements in the job,” Jacob said.

Manning said the only tests should be whether men and women can complete the occupational school.

The services say they will be able to link the physical strength tests to specific job requirements.

“There will be people who question: why do you have that standard?” said Marine Lt. Gen. Robert Milstead, the deputy commandant for manpower and reserve affairs.

But he said the Marines will take a careful and responsible approach to assessing the physical standards for the more than 30 career fields that have been closed to women.

“You’re going to get one chance to do it right,” Milstead said.