8 Other Nations That Send Women to Combat 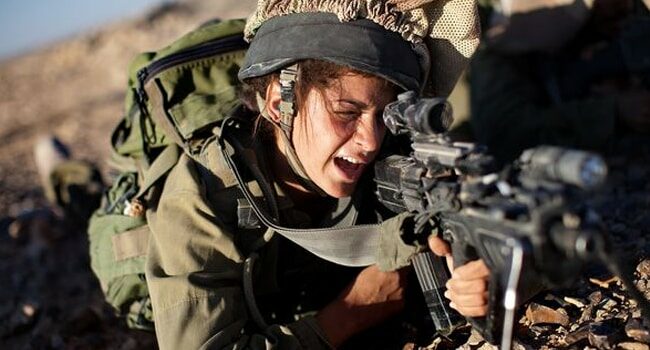 As the Pentagon works to figure out precisely how it will integrate women into military specialties previously closed to them—including infantry and artillery units — top U.S. defense officials are actively studying other militaries around the globe that have already sent women to combat.

The review includes researching the experiences of Australia, Canada, and other nations with whom American troops have worked closely in Iraq and Afghanistan, according to a senior Pentagon official. Some countries have had “three to ten years to go through this process, to integrate women” into combat roles, the official said.

There are roughly a dozen nations that have opened “close combat roles” to women. Those roles are defined by a 2010 British Ministry of Defense (MOD) study as those that include “engaging an enemy on the ground … while being exposed to hostile fire and a high probability of physical contact with the hostile forces personnel.”

In many parts of the world, these efforts have moved quickly once they’ve begun. Though women in Poland were not even accepted at the nation’s military academies until 1999, for example, the country passed a law in 2004 requiring women with college nursing or veterinary degrees to register for compulsory service.

Of the dozen or so countries that allow women to be part of combat units, here are those with the fewest restrictions on what women can do:

Aside from the U.S., this is the country to most recently remove barriers to its front-line units, provided women meet the physical requirements. In 2011, Australia’s defense minister announced that the last 7 percent of positions that had been closed to women—including Special Forces, infantry, and artillery—would be opened up to them.

Driven in large part by a string of sex scandals, the move includes a five-year transition plan. At its height, Australia had more troops in Afghanistan than any non-NATO country, and women currently account for roughly 10 percent of all Australia’s deployed troops.

In 1989 Canada opened all combat roles except those involving submarine warfare to women. In  2000, women were given the green light to serve on subs as well. Three years later, the first female was assigned to serve as captain of a Canadian warship, while another woman became the first female deputy commanding officer of a combat arms unit.

Since 1988, Denmark has had a policy of “total inclusion,” which came on the heels of 1985 “combat trials” exploring the capabilities of women to fight on the front lines. “Danish research showed that women performed just as well as men in land combat roles,” according to the British MOD study. Although all posts are open to women, physical requirements have so far prevented them from joining the country’s Special Operations Forces.

Women make up nearly one-fifth of the French military and can serve in all posts except on submarines and in the riot-control gendarmerie. Though permitted to serve in the combat infantry, however, most chose not to. As a result, women make up only 1.7 percent of that force.

In 2001, the country opened German combat units to women, dramatically increasing the recruitment of female soldiers into the ranks. The number of women in the German Armed Forces is now three times as high as in 2001. As of 2009, roughly 800 female soldiers were serving in combat units.

In 1985 the Israeli Defense Force (IDF) began putting women into combat positions and by 2009 women were serving in artillery units, rescue forces, and in anti-aircraft forces. While women must take part in compulsory military service, they are conscripted for only two years, versus three for men.

A study on the integration of female combatants in the IDF between 2002 and 2005 found that women often exhibit “superior skills” in discipline, motivation, and shooting abilities, yet still face prejudicial treatment stemming from “a perceived threat to the historical male combat identity.”

Women have been able to serve in all defense units, including infantry, armor, and artillery units, since the country passed a law to that effect in 2001. A report four years later found that the move helped drive a societal shift that “values women as well as men,” but that the integration of women into the combat trades “needed a deliberate and concerted effort.” The British MOD report concluded that there has been “variable success in attracting and recruiting women to these areas.”

In 1985, Norway became the first country in NATO to allow women to serve in all combat capacities, including submarines. Norwegian women are also subject to the draft in the event of a national mobilization. “The few women that are attracted by the infantry and cavalry do a great job in the Norwegian Army,” says Col. Ingrid Gjerde, an infantry officer in the Norwegian military for 25 years.

“I have to be clear: You have to meet the physical standards, because the job is still the same. It works very well as long as women hold the standards,” added Colonel Gjerde, who was the commander of Norwegian forces in Afghanistan in 2012. “It’s not a big deal because women who go into these fields know the standards, and it’s not that hard for women to train up to the standards if they really want.”