Gasp! I have a teenager. 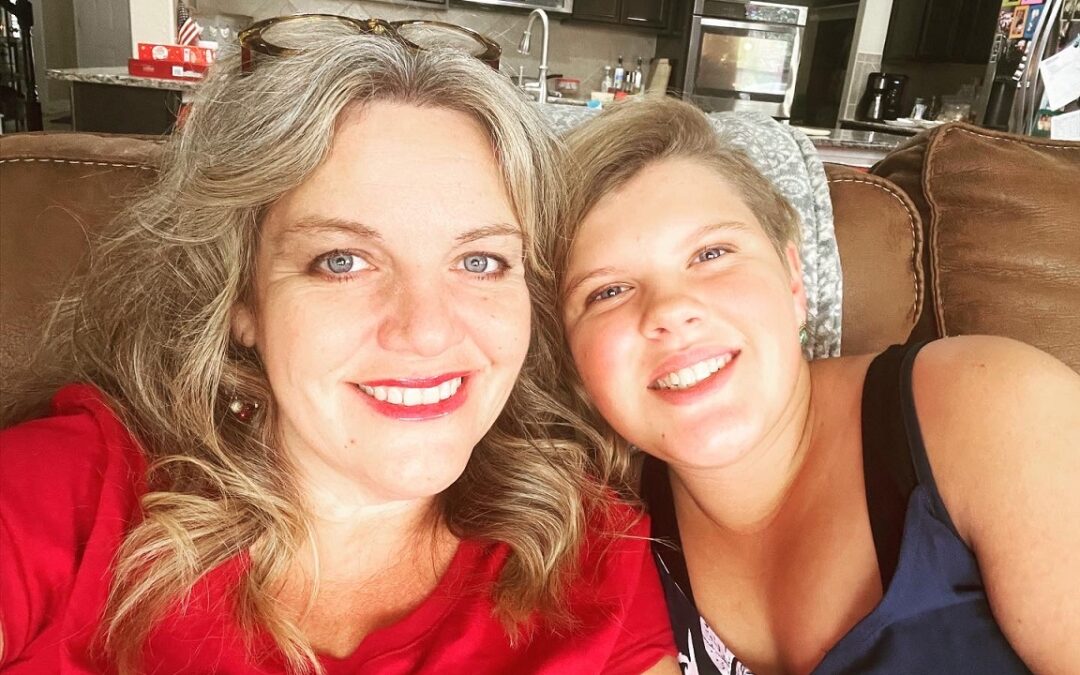 “I do it myself.” That was the start of a video I watched the other day of my then three-year-old daughter trying to put on her shoes. She had them on the wrong feet and instead of tying the laces, she had proudly jumbled them into a knot.

I smiled at her independence and determination and found it adorable. All that, of course, was followed by the maddening process of trying to reason with a three-year-old who insists that a jumbled knot is “fine.”

That same three-year-old is now thirteen. Gasp! I have a teenager.

Now, instead of jumbled knots on backward shoes, it’s makeup and clothing and music choices that she fights me on for independence. Maybe you can relate?

Here are some fun things I’ve discovered about life with a teenager:

Admittedly, my love of New Kids on the Block dates me back to the early ‘90s, but when did the ’90s become ancient history? It doesn’t matter how much well-meaning “in my day” type of advice I offer her, she has decided that it’s simply different for her generation. I get it. I remember thinking the same thing about my mom and her 1960’s advice.

My top tip? No matter how much eye-rolling you have to deal with, make sure you are still having the conversations. All the conversations. The ones about the good things and the bad things and everything in the middle. The ones where you set boundaries and repeat what’s appropriate behavior. I’ve learned that despite the dramatic sighs, they are listening.

Picking a fight is their go-to.

You know what I mean, right? I ask my daughter to put away her shoes and it turns into a civil war that ends in tears. My reaction is wide-eyed disbelief that it escalated so quickly. Her reaction is all about how mean I was. I researched why teenagers always think we’re being so hostile toward them and discovered that it has to do with their undeveloped brains. They rely a lot on facial expressions and tone of voice and use a part of their brain that is wired to detect threats.

My top tip? Pay attention to what they are saying and state out loud the feelings you think they are having to open the lines of effective communication. Sometimes it works. Sometimes it doesn’t. When it doesn’t, make sure to circle back to it when they are calmer and problem-solve a better way for the next time.

Start reading up on sloths. Teenage girls rival them for being slow.

I didn’t know an hour-long shower was even possible until I met age thirteen. Be prepared to give two hours’ notice for anything that requires your teen daughter to be “ready.” I caught my daughter in a talkative mood and discovered that this is when they win fake arguments against their parents, daydream about their crush, cry from an overload of hormones, rehash important moments like why one friend acted “weird” toward them, and so much more. Do teen boys do this, too? I’ll tell you in about four years when I’ve got one of those!

My top tip? There is really only one piece of advice to give — plan ahead. I’ve found that rushing leads to fights and tears and frustration for both of us. I use our Amazon Alexa and my daughter’s phone alarms as a countdown timer for important events.

Phone-a-friend is their lifeline.

Raise your hand if your parents liked every friend you had as a teenager. I’m guessing the answer is no. Teen social groups are the greatest joy and the most devastating loss for a teen when things go sour. These same social groups are directly tied to your teenager’s self-esteem, feelings that they belong and are valued, and where they are going to be encouraged to try new things and have new experiences.

No wonder we parents feel protective of who our children are choosing to spend time with.

My top tip? Support your teen in the way that they like to socialize (online, hobby groups, one-on-one, etc.), and do your best to make sure your teen knows you are there for them if they need to chat.

I’m muddling through this the same way you are, but as a parent, I’m telling you that we’ve got this. So, enjoy the weird and wonderful teen years, and if you need a lifeline… call your mom! They’ll commiserate and remind you of all the times you did the exact same thing. Karma does have a sense of humor!

Anna is a copywriter and digital marketing strategist, and owner of NomadAbout, a digital marketing strategies company that helps entrepreneurs and other business owners showcase their organizations through social media, websites, and marketing campaigns what they are passionate about and how they do it better than anyone else. She is active in the military community, co-hosting a weekly business-oriented livestream and co-leading the Fort Hood Cha Chapter of the Association of Military Spouse Entrepreneurs.

Europe, Africa, and the United States, her family made the leap into military retirement. Anna is also a SpouseLink Ambassador with two kids and two dogs. She’s a long-time homeschool mom that loves dance parties, popcorn, camping, and snorkeling in the ocean. In her spare time, you’ll find her traveling the world with her family, relaxing around a fire pit, or on a long walk with her pups.

Inspiration for You and Your Teens: