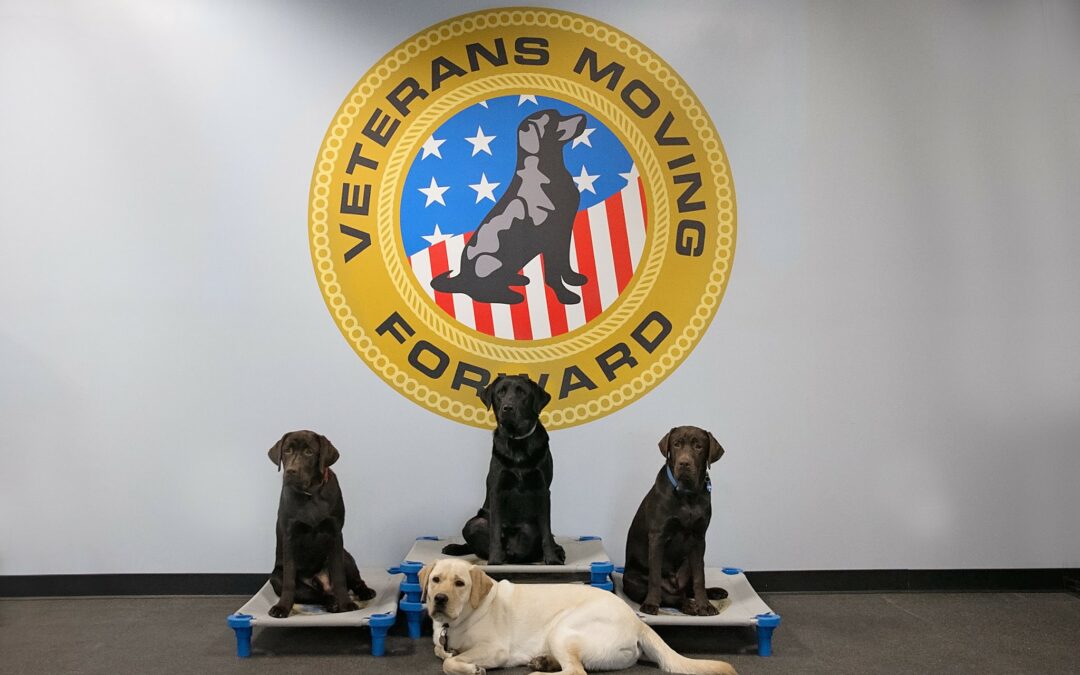 For many of our nation’s Veterans, coming home marks the beginning of another daunting battle. Post-traumatic stress disorder (PTSD) and traumatic brain injuries (TBI), also known as the “invisible wounds of war,” can cause debilitating symptoms in Veterans, including depression, social isolation and, far too often, suicide.

Research shows that specially trained service dogs can reduce stress and anxiety levels, mitigate depression, ease social reintegration, provide comfort, and restore confidence in affected Veterans — and there are many organizations that provide these service dogs at no cost. One of those organizations is Veterans Moving Forward (VMF), a 501c3 nonprofit located in Dulles, VA.

As part of PTSD Awareness Month, Veterans Moving Forward shared three feel-good stories with us about service dogs and the Veterans whose lives they changed.

Service dog Zamp was placed with Jim “Doc” Anderson, an Air Force Veteran who served as a mass casualty officer. Because of his time in the service, Doc suffered severely with PTSD and attempted suicide three times before meeting Zamp.

Named in honor and memory of Marine legend Louis Zamperini, Zamp has given Doc a totally different outlook on life. They’re together 24/7, attending events, poker, and bridge games at the Clubhouse. During Doc’s recent back surgery, Zamp rode in the ambulance and stayed in the hospital for four days.

According to Doc, “Zamp is an incredibly special Service Dog and everyone who has met him agrees that he is special. Since he came into my life full-time, he has made a major difference in my life as witnessed by my wife, therapists, and psychiatrists all who agree that they have seen a change in me that they have not seen in the 20+ years that I have been in counseling. But all that has changed since Zamp entered my life. He is a stabilizing force in my life.”

Deangelo Wynn was first provided a VMF Service Dog, “Jug”, many years ago. He will tell you that Jug was a life-saver once he entered his life, but the time came when Jug needed to retire. Still needing a service dog to help with his challenges due to being bipolar and suffering from post-traumatic stress disorder, VMF was able to place his new “Battle Buddy”, Harry, with Deangelo a year ago. Now, Deangelo enjoys the company of both Jug and Harry.

Named in honor and memory of Silver Star Medal and Purple Heart Medal recipient Harrison “Doc” Meyer, Harry’s first session with Deangelo “was just awesome.” Harry immediately took after Deangelo as if they had been old buddies. “It’s a miracle to have a service dog, and now I’m blessed with two great buddies,” Wynn said. “It’s been life-changing. I’ve gone from 11 medications to two.”

Named in honor and memory of Army Staff Sergeant Clayton Jones, Service Dog in Training (SDiT) Clay is a very energetic puppy who is progressing very well with his specialized training.

Clay will train for his important role for two years to become a special “Battle Buddy” for a deserving Veteran to provide support and assistance including obedience training, retrieving medicines, and learning how to ease a Veteran’s anxiety when they encounter a mental challenge such as flashbacks or other types of adjustment disorders.