5 of the Most Inspiring K-9 Veterans 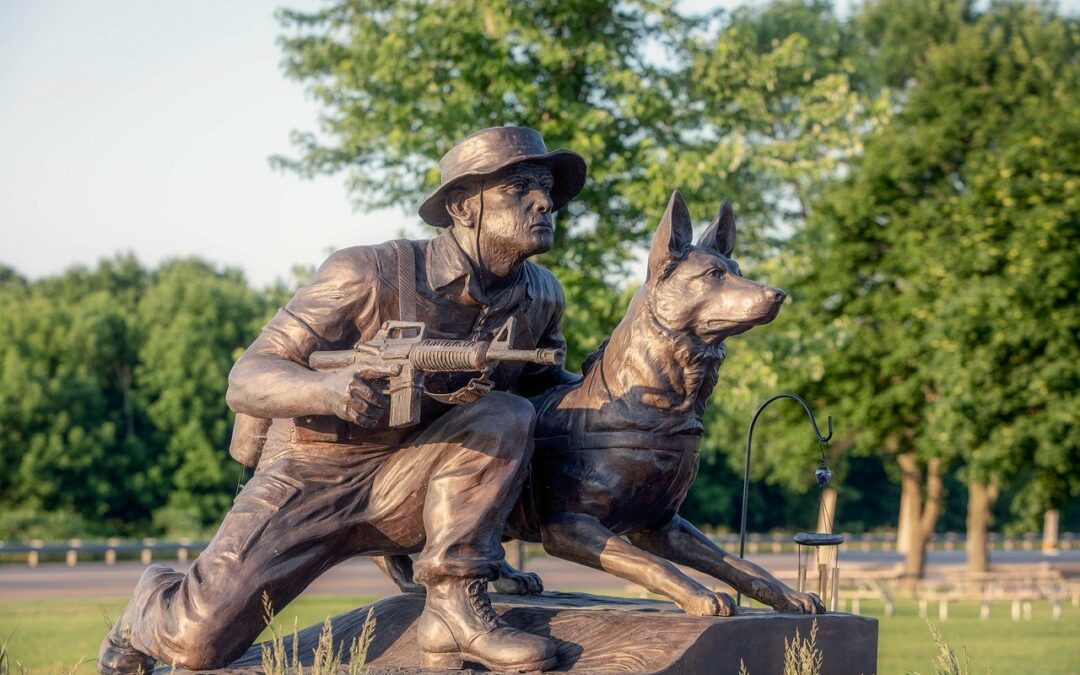 Currently, there are about 1,600 military working dogs on the frontlines. Some serve alongside our military servicemembers, K-9 units that detect explosives (including IEDs), and service dogs who assist our military Veterans during post-war recovery.

National K-9 Veteran’s Day is March 13, which is also the U.S. Army K-9 Corps’ official birthday, and we’re celebrating by sharing the stories of 5 of these heroic military working dogs whose bravery, strength, and valor are an inspiration for us all.

Probably the most famous war dog, Stubby the American Pit Bull Terrier was the only dog to be given the rank of Sergeant.

Stubby was found as a stray on the campus of Yale University in 1917 and smuggled to France during World War I by his adoptive owner, Cpl. John Robert Conroy.

Stubby served with the 102nd Infantry Regiment (U.S.) for 18 months in the battlefield trenches of France, participating in 17 battles and four offenses, and improving troop morale. He also located wounded soldiers and used his keen senses to warn his unit of poison-gas attacks and incoming artillery fire. Most notably, Stubby received sole credit for capturing a German spy in the Argonne, earning him a promotion to Sergeant.

Stubby died in his owner’s arms in 1926, but his legacy lives on through the Stubby Award for Canine Heroism, four books, and the fact-based animated story, Sgt. Stubby: An American Hero.

On December 4, 1966, Nemo the German Shepherd and Airman 2nd Class Bob Thorneburg were on patrol at a cemetery near an airbase in Vietnam when they suddenly came under enemy fire.

After neutralizing two Viet Cong guerillas, Thorneburg was shot in the shoulder and Nemo took a round to his face, losing his right eye. Undaunted, Nemo still went after the enemy, which gave Thorneburg the precious minutes he needed to call in reinforcements before ultimately losing consciousness. With his handler down, Nemo crawled on top of the soldier’s body to protect him from further harm. It is said that the dog didn’t let anyone touch his fallen handler; it took a veterinarian to remove Nemo.

Nemo and Thorneburg both recovered from their wounds and Nemo was given a permanent retirement kennel. He died at the age of 11 in December 1972.

Smoky, a 4-lb. Yorkshire terrier, proves that size and breed don’t matter when it comes to serving your country and saving lives.

Originally found in an abandoned foxhole in a New Guinea jungle, Smoky was sold to Corporal William A. Wynne and the two soon became “attached at the hip” — sleeping in his tent, sharing rations, and learning many different tricks that entertained the troops. Together, Smoky and Wynne earned eight battle stars, participated in 12 combat missions, and survived over 150 air raids.

Most notably, Smoky used her small size to help engineers build an airbase at the Lingayen Gulf on Luzon by navigating through a 70-foot-long culvert, something that would have taken hundreds of crewmen multiple days to complete.

On February 21, 1957, Smoky died at the age of 14 and was buried in the Cleveland Metroparks in a World War II ammo box. Atop her grave, there lies a bronze sculpture of Smoky sitting in a GI helmet.

William Wynne, now 98, lives on and wrote a memoir about his dog entitled Yorkie Doodle Dandy, which can be found on Amazon.

Cairo is a Belgian Malinois and a canine member of the elite Navy SEALs.

What’s unique about Cairo is that he is the only military personnel named from Operation Neptune Spear — the covert military operation that took down Osama Bin Laden in May of 2011.

During the operation, Cairo helped secure the outside perimeter of the building and was tasked with tracking down anyone who tried to escape, as well as being an alert of any incoming interference. The mission was a success; Bin Laden was killed, and all the SEALs on the mission survived.

After Cairo finished his service, he went to live with his handler, Will Chesney and helped him with his PTSD.

To learn more about Cairo’s inspirational story, check out No Ordinary Dog: My Partner from the SEAL Teams to the bin Laden Raid, by Will Chesney on Amazon.

Lucca was a German Shepherd/Belgian Malinois service dog who was trained and employed by the United States Marine Corps for 6 years to detect explosives.

Through 400 patrols and discovering nearly 40 explosive devices, not a single Marine died under Lucca’s service. But during a patrol in Afghanistan in 2012, she was injured by an IED blast and lost her left front leg to the blast. After recovering at Camp Pendleton, Lucca officially retired in 2012 and was adopted by her original handler, Gunnery Sergeant Chris Willingham.

See a video about Lucca from Inside Edition.

There are countless stories of bravery and heroism from the four-legged members of the military, and those continue to this day.