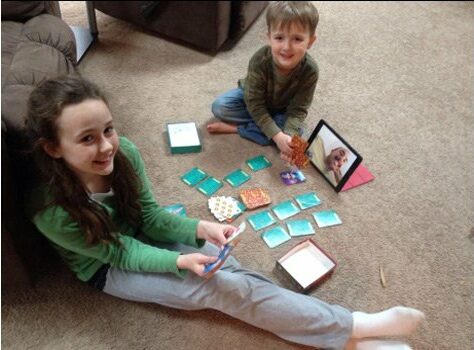 This is part one of a two-part article. The other half is on Parenting Through Re-integrations, but the content was running away from me, so I decided to divide it. Hope you find it helpful!

I think we can all agree that the toughest job in the military is dealing with our BRATs. They didn’t have the chance to choose this life. It was decided for them. I understand that no child really has the ability to control where they’re going to live or their parents are going to work, but military children go through an enormous amount of trauma and anxiety as a result of being raised in the military. They suffer from the pain involved in deployments and reintegration. The difference between the children and spouses of a service member is that the kids often don’t have other tools to properly express what they’re feeling.

I’m lucky enough to be truly blessed with resilient children, but they’ve been through a lot. I have no idea whether this pattern will continue as they age, but I’ll enjoy it while I can. The truth is, though, that while our military service continues, my children will live in a household full of constant ups and downs and drastic changes in parenting styles as we work our way through deployments and reintegration periods.

So, the question becomes, “How can we work to lessen the emotional trauma of deployment cycles for our children?” Here are a few of tips that have kept my family together through nine deployments.

The idea of maintaining the status quo when your spouse is deployed is probably my weakest area. My husband and I have VERY different styles of parenting, housekeeping, time management, socializing with friends, and on and on the list goes. We are the perfect example of “opposites attract.” This makes it really interesting when he’s gone so much and we switch back and forth between “Daddy mode” and “Mommy mode” in the house. The first 3-4 deployments, I allowed myself to run the household as I would without taking his preferences into consideration. I had my own set of rules for meal times, bedtime rituals, behavior in the car, where food was allowed in the house, and a number of other things. I figured that since he was gone I deserved the right to make it entirely My house, my rules.

After a few tough reintegration periods, though, I realized that this was a pretty selfish way of looking at things. I realized that the kids were going through an unnecessary amount of upheaval simply because I wanted to insist on my preferences ½ the time but was willing to make compromises when their dad was home. The frustration this created wasn’t worth the gumption required to put my foot down and insist that no snacks are allowed in the basement. After analyzing the tension in the household and realizing that I had the ability to make things a bit easier on everyone (myself included), I went into the next deployment determined to keep as many of the little day-to-day rules in place that are there when my husband is home. It was annoying at times when I didn’t want to enforce a rule or wanted to insist on something I knew would get me the “calm down Mrs Type ‘A’” look from my husband, but I really tried to stick to what the kids were used to as much as I could. Miraculously, it worked! The next reintegration went SO much more smoothly.

Accept That You Can’t Keep Everything the Same

Now, while I am a proponent of maintaining stability, I also realize that we can’t do this in every situation. Some routines will have to change. One example in our family is how, when my husband is home, we don’t socialize much with friends. He has been gone about ½ the year the last 4 years, and when he is actually living under the same roof as the rest of us, we really close ourselves off from the rest of the world. Most free time is spent as a little family unit. We need that time to stay bonded well. We don’t have many commitments in the evenings or weekends, and we try to do what we can to keep time available to just be a family. This could change as the kids get older, but for now it works for us. However, when my husband is gone, I have to be out. If I allow myself too much free time, I start to get depressed and anxious. So my kids have to put up with me scheduling very full weeks. They don’t always love it, but I operate under the assumption that a mentally healthy mother is more important than extra free time in the evenings. The kids prefer it like their dad does, so when he gets home they happily revert to home bodies.

Another example of things that you can’t keep the same are individual personalities, preferences, and maturity levels. I’ve found that most military spouses feel a bit of guilt over the fact that the service members miss so much of their kids’ lives. Unfortunately, this is just part of life in a military family. As parents, we have to realize that our children are bound to change during deployments. This could mean going from crawling to walking for a toddler or for a pre-teen/teenager to go from wearing delicate dresses to dressing like a punk rocker. Some of these changes might be more drastic than others. But it’s impossible to think that things will be exactly the same when your service member returns. It makes it easier during both the deployment and reintegration if you accept the fact that some things change, and realize that so much is beyond your control as a parent or military spouse.

Talk with Your Kids a LOT (if They’re Old Enough)

Obviously, this point won’t help if you have an infant or toddler. Kids that young can’t really grasp what is going on or why their world feels like it’s spinning out of control with one parent gone. I’ve definitely had struggles when my son was 18 months old and his daddy was gone so much. It is very hard to watch kids this young when they can tell something is “off” but can’t communicate how they’re feeling about it. However, as soon as your kids are old enough to start understanding about deployments, talk their ears off! I make it a point to be a bit of an over-sharer with my kids. I have no problem sharing as many details as my kids can handle — I might even give them too much sometimes.

The one caution I would give is to keep OPSEC in mind. My husband has a job that I know practically nothing about, and it works better that way. We do the same thing with our kids. One example is that I don’t tell them when their dad is coming home until he’s already here or at least in states. I want to share with them, but I don’t want to put an unnecessary burden on them of worrying about what they can and can’t say to friends and family.

This is something I have to constantly remind myself. I am, by far, my harshest critic. I beat myself up over every little mistake, and I guilt myself a LOT over how I handle parenting through deployments. It’s important to remember, though, that we are going to screw things up sometimes, and that’s okay. When our service members are gone, parenting is often like stumbling around in the dark. I know that we go into survival mode, and I sometimes wonder how we actually all survive. There are some things that I know I’m far from perfect in, but that’s all right. When my husband is gone, my kids get far too much time on electronics. This is especially true during the winter months when it’s just too cold for me to kick them outside to play. I don’t recommend everyone allow their children to melt their brains with electronics for hours a day, but sometimes, it’s what we have to do around here so we don’t go crazy.

When my husband is gone, my kids tend to get a little more “lippy” than I’d like. This is simply because there’s only one set of adult ears in the house to hear them when they’re mouthing off or talking back. During more than one reintegration, my husband has looked at me after my son has been sassing me and asked “why do you let him talk to you like that!?” I have to tell him the truth — I didn’t hear/notice it. It’s so easy as a parent to tune out your kids. I do this more than I should, but I don’t allow myself to stress about it because (again), we’re just trying to survive here. I could go on for hours about all the things I’m doing wrong, but it’s not worth it to beat myself up over most of them. I have to accept that I’m doing the best I can. My kids are (mostly) well behaved in public when it matters. They don’t run around like banshees (all that much). They don’t throw tantrums in the middle of the commissary aisles. We’re doing all right and that has to be enough when their dad is deployed. We sometimes have to pick up the pieces of the messes I create with my shoddy parenting, but at least everyone is still alive when he comes back!

MilSpouse Joy Draper has been an Air Force wife for the last seven years. She serves as a Key Spouse with her squadron and has been actively involved in the development of the Spouses Resilience Program at Offutt AFB. She has been married 11 years and has a 10-year-old daughter and 5-year-old son.

Joy’s family has been through nine deployments ranging from 60-220 days. She is actively involved with the Military Spouse Advocacy Network as the Deployment and Reintegration Coordinator. She blogs about parenting, deployment and reintegration issues, and the reality of what life is as an Air Force family. You can check her blog out at throughitallandthensome.blogspot.com or email her at [email protected]