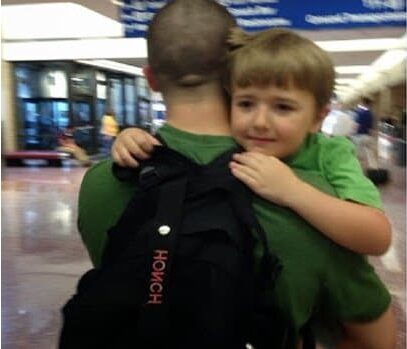 It’s been a couple months since I wrote about parenting kids through military deployments here. My family is now back together after a 228-day deployment, so we’re in the throes of learning how to parent our kids through the reintegration phase of life. We’ve done this eight times before after other deployments, but this long one made things different altogether. No deployment is the same! Here are a few things I’ve learned in the last two weeks:

Everybody changes over time. In a family, kids grow up. Relationships mature (or devolve). The servicemember has gone through life-changing events — even if they weren’t in imminent danger. Spending that much time apart makes people think differently. You can’t go into a reintegration stage and expect everything to just fall back into place as they were before deployment. Use it as an opportunity to make some positive adjustments to a new “normal.”

Work Hard to Put the Family Back Together Not everything is going to just “slide back into place” when your service member comes home. There are awkward situations that can arise. Kids might not be as comfortable fully opening up to the parent who was away. It’s easy for those that stayed home to build strong bonds that can cause some tough situations. Putting a family back together is work. HARD WORK. It takes time, love, tenderness, determination, and strength (to name a few). I often find myself saying or doing something that I know could create problems, and I admit my mistake and continue to work to change my attitude. The WHOLE family has to work at it. It’s rewarding in the long run!

Explain Everything to Your Kids

I’ve found that it’s really easy for my little family to misunderstand instructions and take things the wrong way. In the last two weeks, I’ve had to sit both kids and my husband down and explain that there are misunderstandings that are taking place because we’re not all used to communicating or living together. Both the kids are extremely sensitive to correction from their dad because it’s SUCH a treat to have him home. We’ve had to have multiple conversations about how “Dad is a parent, too” and you have to listen to him, and it’s not all just fun and games — sometimes he is serious. We speak the language of sarcasm in our home, so sometimes it’s tough for the kids to differentiate whether DH is joking or not. They’re getting better at it, though. I have found that if I immediately address a situation that looks like it’s caused hurt feelings or been misunderstood, things work out better in the long run. I’m a HUGE advocate for talking, talking, and talking some more with your children. I’m an over-sharer, but as a result, my kids feel more grounded and informed about the world and our family.

Talk About Your Struggles

I’m not suggesting that you turn into “Debbie Downer.” But I think it’s vital to speak with your spouse about things that are creating internal struggles. One of my worst faults is that I sometimes treat my spouse like one of the kids. It bugs the heck out of him (understandably so!). I have had to talk through that with him, though. Explain to him that I’m used to being the only Boss in the house, and sharing that responsibility is both a relief and difficult. We’ve had conversations about the fact that I feel my kids are completely ignoring me and lavishing love on their dad. It’s a silly internal battle to have. I know these kids love me, and I know what a treat it must be to have their father home after so long. It still nags at me, though. Just under the surface. When my son (who was my best snuggle bug while DH was away) refuses to hug me or won’t sit with me, it does hurt a little. I know it’s irrational, but it’s there. I’ve talked with my husband about this because I need the reassurance that it’s normal. Just remember that you have a partner who is now HOME, so you can share both the joy and the trials.

Allow Them to Parent, Too

This one is my biggest flaw. Many, many times in the last two weeks, I have stepped into a conversation or answered for my husband. I am used to being the “top dog” in the house. Everything had to go through me. Now I’m back to co-parenting, and I get to share the responsibility and decision making. Remember to step back some and let your service member get involved and take on that parental role again. I’ll be the first to admit that this isn’t easy! My son was asking a question the other day and I answered it, and his response was “Daddy has to answer.” When I asked why, he told me “Daddy is the boss and I don’t have to listen to you now.” I was both annoyed and hurt. His dad had a long talk with him about how that was NOT the case and Mommy is a boss too. But, I can see the silver lining on that storm cloud. It means that my son has allowed his dad to take authority and just be a dad!

Let’s admit it, everyone screws up somehow. We’re in this push-pull scenario where the kids and I are so happy to have their dad home, but it means that all our routines are thrown out the window. We’ve all screwed up in some way since he’s been back. I know that I’ve stepped on toes when he’s trying to parent the kids. The kids have not fully understood the reintegration process and made some mistakes. My husband is trying SO hard to step right in and be a wonderful husband and father (and he’s doing an AMAZING job!) — but he’s messed up some, too. He reminded me of my mantra “Give Yourself Grace” that I so often say. I had done something stupid and then become defensive and then suddenly realized I was TOTALLY in the wrong. So I broke down, but he was right there to remind me that this is a process. There are going to be bumps in the road to full reintegration. We need to give ourselves grace to make those mistakes, learn from them, and move on.

Don’t Insist that Everything be Done Your Way Like I said before, things are going to change. Schedules have to be adjusted. Kids are going to want to do different things to reintegrate their father back into their lives. I have to constantly remind myself that I’m no longer the only adult in the house and that my husband and I work as part of a team to get things done around here. I can’t just make a decision anymore without a discussion. I might have plans for one thing, but he’s got something else on the schedule. Be willing to go with the flow. Be flexible. Allow for parenting methods, schedules, activities, and so much more to be done differently. Be willing to collaborate with your service member when making decisions related to the kids! Learn to co-parent again! It’ll be worth it.

Look at Things from the Servicemembers’ Perspective It took me seven deployments, but I finally took time to really contemplate what it must be like for my DH during his deployments. It was an eye opener, and it really made me analyze and change my behavior as we deal with reintegration. Think about this, often, our service members can be deployed and go months on end without even seeing a child. They might have FaceTime or Skype interactions with our family while deployed, but none of this “living together and constantly being in each other’s space.” I can’t even imagine what it must be like to be away from ALL children for a deployment. My military spouse also can’t imagine the chaos and struggles I’ve been going through holding down the fort at home when I’m up to my eyeballs in kids and school projects and life back home. The important thing to focus on is that you have been living completely separate lives, but as parents you need to work together when handling parenting issues, and you NEED to keep the lines of communication open. I often struggle with this, but when we’re struggling with reintegration and I’m in the middle of a hissy fit over his behavior, I try to stop myself and analyze the entire situation and try to imagine what he’s going through and been through and how tough it has to be for him too. I don’t always succeed, but I try to allow him grace in the midst of trials even if it means biting my tongue sometimes.

Admit if You Need Outside Help

I know this has gotten long, but I’ll close with this point. If you find that tensions are just rising around the house and everyone is walking around on eggshells, be willing to get outside counsel. There are so many resources for military service members when coming home from a deployment. It can be very difficult to put the family unit back together, to learn to co-parent again, to learn how to live in the same house again, or just to learn how to communicate fully again. There are ways you can get help if you feel like the struggle has gone on too long. Military OneSource is an amazing resource for getting assistance. Most bases now have Military Family Life Counselors who can meet with you anywhere other than your home to come up with solutions that might help. The Red Cross offers reintegration counseling sessions that I’ve heard great things about too. Remember to use your resources. You’re not an island; there are organizations that are LONGING to help military families. Don’t drown — call for help if you need it!

MilSpouse Joy Draper has been an Air Force wife for the last seven years. She serves as a Key Spouse with her squadron and has been actively involved in the development of the Spouses Resilience Program at Offutt AFB. She has been married 11 years and has a 10-year-old daughter and 5-year-old son.

Joy’s family has been through nine deployments ranging from 60-220 days. She is actively involved with the Military Spouse Advocacy Network as the Deployment and Reintegration Coordinator. She blogs about parenting, deployment and reintegration issues, and the reality of what life is as an Air Force family. You can check her blog out at throughitallandthensome.blogspot.com or email her at [email protected]