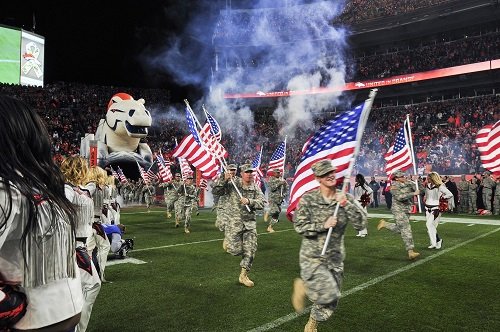 “This month we reflect on the sacrifices of our heroes and increase our focus to ensure more servicemembers, Veterans and their families find the assistance they need, when they need it,” said Anna Isaacson, NFL senior vice president of social responsibility.

This Sunday (November 11) is Veterans Day, a day when we stop to remember and reflect on the immense sacrifice and bravery that our troops display on a daily basis. But just because Veterans Day only gets one day on the calendar, that doesn’t mean our troops don’t deserve more. Say, a whole month’s worth of recognition? We think that’s a good start and apparently, the NFL does, too. 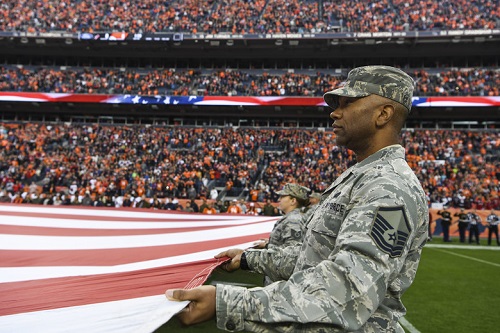 If you’re be watching football this Sunday, or any time throughout November, a few things may have looked a bit different. More servicemembers on the sidelines, ribbons and memorials in the end zones, and even some camouflage on the coaches. The football field is far from a battle zone, but things might be looking a bit more militant out there this month. That’s all thanks to the NFL’s annual Salute to Service program.

What is “Salute to Service”?

According to nfl.com the Salute to Service program is “a year-round effort to Honor, Empower, and Connect our nation’s service members, veterans and their families. It is grounded in deep partnerships with nonprofit organizations that support the military community in the United States and across the world.” In addition, each team in the NFL has designated one home game in the month of November — Military Family Month — to honor servicemembers and their families.

As part of this year’s campaign, the NFL has pledged to donate $5 to their military appreciation nonprofit partners for every use of the #SalutetoService hashtag on Twitter through November 19. With nonprofit partners such Pat Tillman Foundation, Tragedy Assistance Program for Survivors (TAPS), the Bob Woodruff Foundation, the Wounded Warrior Project, and more, that makes for some powerful tweets. But if you want to go for max value, make sure you’re using the hashtag this Sunday (November 11). The NFL’s promised to up their donations to $25/per tweet in honor of Veterans Day — a whopping 500% jump for the day.

Get your Twitter fingers ready, folks. Let’s rack up some cash for those military nonprofits. 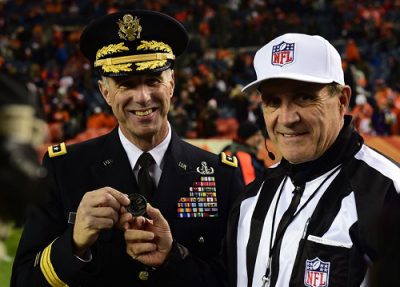 Since 2011, the Salute to Service program has raised more than $26 million dollars to fund programs and provide resources for servicemembers, veterans, and their families. With nearly $1.5 million already raised in 2018, it looks like it’ll be another great year of fundraising for the NFL and its partners.

For a closer look at what the Salute to Service program is all about, check out the video below. And if you spot some of that camouflaged NFL gear on the sidelines this weekend, don’t think it’s just for the players. You, too, can support the troops in style with the limited-edition military-themed NFL gear from nflshop.com. 100% of the proceeds from the Salute to Service gear is donated directly to the NFL’s military appreciation nonprofit partners.

Now who’s ready for some football?!