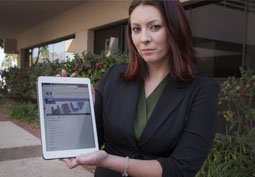 A military spouse who suffered from depression caused by the pressure of her husband’s deployments is using her experience to help others.

Liz Snell, who lives at Camp Pendleton with her Marine husband, Brian, and their two children, found herself deep in depression and experiencing “suicidal thoughts” brought on by the stress of military life.

Snell sought professional help and began blogging about her experiences in a bid to help herself, and others in a similar position.

Such was the reaction to her online posts, Snell said she recognized the need for a platform to provide “strong mental health support” specific to military spouses.

In May, she launched the Military Spouses of Strength (MSoS) website — which Snell described as a “resource-driven initiative.”

“Military spouses have endured supporting their service husbands through nearly 13 years of war,” said Snell, 32, whose husband has deployed three times to Afghanistan and Iraq, in addition to other deployments around the world.

“These combat and noncombat deployments have created unique challenges for military families. We have had to juggle so many aspects of life while our husbands are deployed for seven months.”

The MSoS website acts as a portal to a range of services offered by licensed professionals. It provides information, resources, peer-to-peer support, and a place to connect with others going through mental illness.

Ultimately Snell said she hopes MSoS will help to break down the “stigma” attached to mental health issues in the military.

A recent MSoS survey found that nearly 91 percent of those surveyed stated they had dealt with depression. Of that number, 73 percent felt it was caused by deployment, and 83 percent sought out mental health support.

“Depression among military spouses seems to be a little black secret that no one really wants to talk about,” Snell added. “We need to speak out and admit we have a problem in order for us to seek the help we need.”

Such has been the reaction to the website that Snell was among the nominees for this year’s Armed Forces Insurance Military Spouse of the Year Award.

One of the women to directly benefit from MSoS is Shannon Messer, who lives at Camp Pendleton with her Marine husband, Mark.

Messer, 32, said she has suffered bouts of depression during her five-year marriage due to the strain caused by military commitments.

“This has a lot to do with the constant moving, stresses of deployment among other things,” Messer said. “I knew that I wasn’t alone in my battle with depression, but I didn’t realize it was such a huge issue among military spouses.”

Messer became friends with Snell in the summer of 2012. She said that had Snell not shared her experiences and started the organization, she would never have sought the treatment she needed.

Messer is now the communications director of MSoS, helping others receive treatment or counseling.

For further information on the Military Spouses of Strength, visit