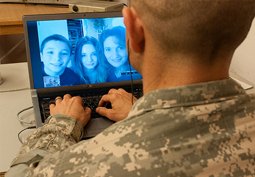 Don’t feel so bad for couples who live apart. Absence, according to the latest research, does make the heart grow fonder — as long as there’s video-chat, IMing, telephones or texting.

About 3 million spouses in the U.S. live far each away from each other, even though they’d prefer to live together, and the new study, published in the Journal of Communication, found that the separation did not have such a negative effect on their relationships.

The researchers asked 63 heterosexual couples, half of whom lived together, and half whom were in long distance relationships, to keep a diary of one week of interactions with their beloved. The couples were young (mostly college students around age 21) and in love. The ones who lived apart had been separated geographically for an average of 17 months. The researchers, L. Crystal Jiang of City University of Hong Kong and Jeffrey T. Hancock of Cornell University, found, not surprisingly, that far-flung couples interacted fewer times per day. But these interactions were more meaningful.

The couples who were in what was once called “geographically impossible” situations tended to reveal more about themselves in each conversation and to idealize their partner’s response to each piece of self-disclosure. They also spent more time on each interaction. Such disclosures and idealizations, studies suggest, are the building blocks of intimacy. So it’s not surprising that the diaries reflected more satisfaction among the remotely placed partners. “The long-distance couples try harder than geographically close couples in communicating affection and intimacy,” says Jiang, “and their efforts do pay back.”

The couples who saw each other all the time, on the other hand, while recording more conversations, didn’t make such an effort and were more realistic about their partners’ responses. As Jiang and her colleagues wrote, earlier work on the effect of distance on the quality of relationships showed that “long-distance friends focus more on mutual understanding and trust while geographically close friends value practical help and consider ‘being there when needed’ an important feature of close friendship.”

Why does distance drive people to have deeper exchanges? The study doesn’t say, but it could be that communicating with somebody without having to worry about decoding their body language made them braver and more forthright. Or it could be that having only limited access to their partners made them want to use the time more meaningfully. Or it could just be that when they had the chance to communicate with their partner, they made it a priority and turned off the TV, looked away from social media or stopped multitasking.

There aren’t that many studies on long-distance relationships, even though 75% of college students claim to have had one at some point. However, as two-career couples become more normative and as the economy compels both halves of a couple to take whatever work they can get, even if it’s not in the same town, it’s an area ripe for more inspection. The recent story of Manti Te’o, who had what seemed to him a genuine long-distance relationship with a girlfriend who turned out to be a fiction, suggests that bonds formed through media can be quite potent. On the other hand, the high rate of divorce among returning war veterans suggests that it’s not simply a matter of setting up a Skype connection while the service members are overseas. Previous studies have looked at how couples cope with problems, such as jealousy and stress, and it’s not a trivial effort.

One hint from the study for those who find themselves trying to sustain a relationship from afar: avoid email. Couples who lived apart or who lived together both used email about the same amount, which was not much. Among this age group, at least, email was the least romantic form of communication. Score one for modern technology.