From Enlisted to Officer – Moving Through the Ranks 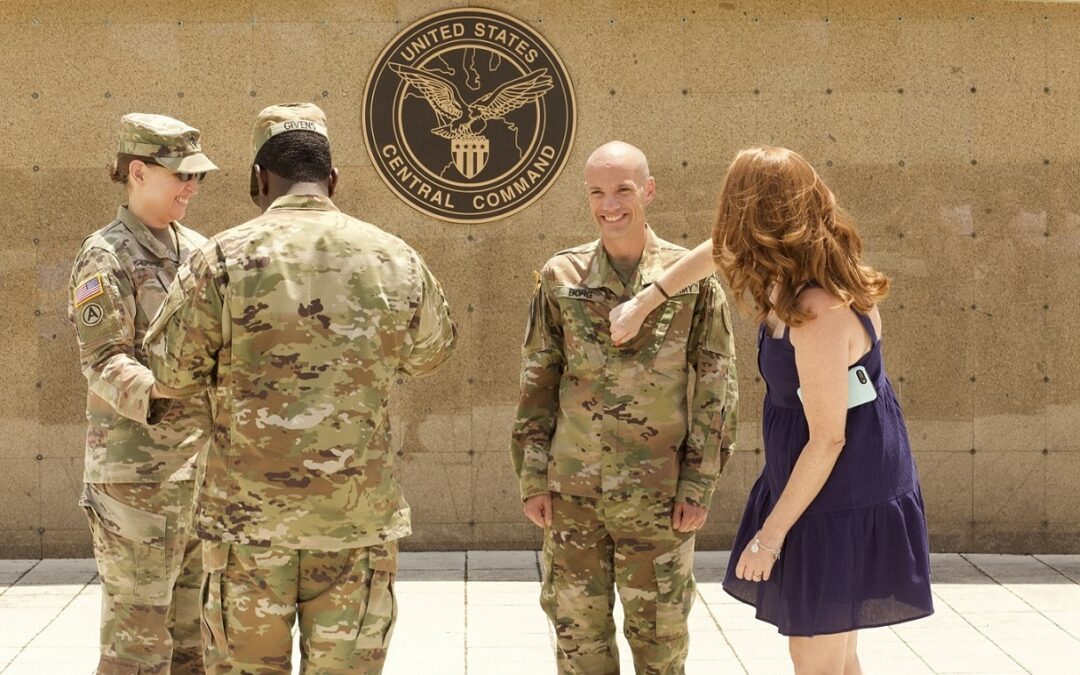 It was right after September 11, 2001, that my husband (then boyfriend) enlisted in the Army. We were both in our junior year of college at Eastern Michigan University and had been dating since we were 18 years old. We were both Division 1 college athletes… Joe was a runner and I was a gymnast. I like to tell people we met on a track. I was an awful runner, but our coach made us run for conditioning, and I remember the Track and Field guys watching us painfully run laps around the track. I’m sure they’d just gotten back from their 12-mile slow paced jog of 7-minute miles. I’m not sure what Joe saw in me, because it definitely wasn’t my running form.

I remember the terrorist attacks happening like they were yesterday. Joe thought about joining the Army quickly after that. We went on a date to see the movie “Black Hawk Down” a couple months later. I sat there googly-eyed, staring at Josh Hartnett, and he was sitting there planning on how to tell me that he was going to join the Army. I was watching a war movie and literally had no sense of war… and little did I know Joe was going to leave shortly after and spend the next 20 years defending his country. Some of those years were spent in war zones.

I remember the day the recruiter picked Joe up to take him to the airport to head to South Carolina, Fort Jackson, for boot camp. I wrote to him every single day… and he saved every single letter. I drove with his parents out to watch him graduate and then he was onto AIT School (Advanced Individual Training). Joe’s Drill Sergeant gave him the nickname “Cy-Borg” after running two miles in a little over 9 minutes.  Going into boot camp coming from being a Division 1 athlete has its benefits. Just a couple months went by and he was back at Eastern Michigan and onto his fourth year of college. He did something called the Army Simultaneous Membership Program (SMP). This allowed him, as an enlisted member of the Army, to participate in the Advanced ROTC program. Joe was able to do two years of ROTC as part of the SMP. He graduated and was commissioned into active duty as an officer in 2004. We got married shortly after, and that made me an Army Wife. I had no idea what I was in for.

I was lucky in that Joe didn’t put pressure on me to be something I wasn’t in my new duty as Army Wife. He supported me and I supported him. I wore sweatpants and messy buns, and couldn’t attend Army spouse “Teas” because I had a full-time job working for Military Housing. Besides, I didn’t own a flowered dress, or even drink tea. I was much more of a coffee-and-pajama girl. As Joe climbed the ranks, I felt the pressure to do more, or be more of an Army Wife. I often thought that I would reflect badly on his career because I wasn’t as involved. He reminds me all the time to be myself and to be involved as much as I want. The thing was… I just had to find out how to be involved in my own way. So I held pancake breakfasts for deployed spouses (jammies allowed) and volunteered at PWOC. I found my groove and how I fit into this military life.

Joe’s enlistment date is March of 2002, and we are at the victory line, 20 years later. He’s done two tours to South Korea, two deployments to Afghanistan, and a deployment to Iraq. He’s gone from Private First Class all the way to Lieutenant Colonel. I stood by him the entire time watching him grow personally and professionally. As he gets set to do a Battalion Command, and be a leader for young soldiers, I’m sure he won’t forget where it all started. And I’ll continue to serve pancakes to all my fellow MilSpouses, jammies required.