My Friend, the High-Ranking Officer Spouse 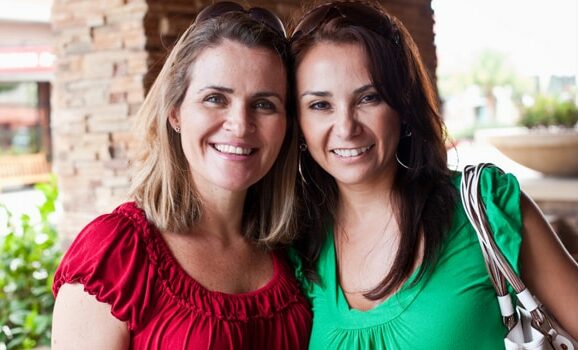 I am an Enlisted Spouse. I have a dear friend who is an Officer Spouse. A high-ranking Officer Spouse. And she has completely changed my view on how spouses who are married to folks of different ranks should behave and relate to one another.

I remember the days when my husband, a Marine, was a brand new NCO and we were invited to a party at the house of his Gunny at the time. His wife was going to be there, and I was terrified. I don’t recall if I was so scared because I had any bad experience with spouses of “higher rank,” or if I was simply intimidated because in the Marine Corps the rank of “Gunny” is kind of a big deal for enlisted folks. A retired Marine once told me it was the most respected and important rank in The Corps.

But I do know that now, as that wife of a Gunny, I work hard to make sure that no spouse ever feels uncomfortable around me. Honestly, I couldn’t tell you the rank of most of my friend’s husbands. This is partially because I really do not place any judgment on them based on that, and partially due to my horrible ability (even after 13 years of marriage and being pretty immersed in military life in my volunteer work and professional life) to remember rank structure. Now we are stationed on an Army post…so truly, I don’t have a clue what rank is on anyone’s uniform.

I know what neighborhood they live in on post. This gives me a clue. But other than the fact that I covet the extra space they have or a shiny new appliance, what neighborhood they reside in doesn’t make a bit if difference either. (By the luck of the draw, our current housing means that we have friends of “lesser” rank with nicer houses than we live in.)

“Don’t wear your husband’s rank… you didn’t earn that, he did!” We have all heard it, and we have all probably said it. For the most part, I find that statement to be true. We, as spouses, should not think ourselves any better than another spouse because of our servicemember’s rank, BUT that doesn’t mean that we should just ignore it altogether.

The reality is that in most military marriages, earning that rank has been, in part a joint effort. Rank is earned not only by time-in-grade, but by merit, physical fitness scores, different billets, etc. As a servicemember achieves all the things necessary to earn that rank, if they are married and have kids, their families DO contribute to that success. They move, they hold down the home front, they hold things together during long hours. They are allowing that servicemember to fulfill their career goals AND maintain a desired family life.

So, while I don’t for one minute believe I “earned” the rank of Gunny, I do recognize that our family has contributed to that. With higher rank comes more responsibility and often times more stress… our entire family deals with that. And that is the case for high ranking officers who have families as well. So, even though I am admittedly jealous of the square footage and new appliances in that elusive Officer house on the hill… I do not begrudge the family that extra benefit. I believe they are all deserving of it.

But with great reward comes great responsibility, right? I truly believe that with every year that is added to his service and with every promotion…I then have a responsibility to make sure that I remember a few things.

1) I need to remember what it felt like to live this life, with all its stressors, AND be a lot less financially secure than we are today. We always made it (even when I wasn’t working), but to say it was a breeze… well, that just was not the case.

2) I need to remember what it felt like to be living this life, and have very little clue what to expect or where to turn for answers. I figured it out, of course. But it was not without worry, and lots of awkward moments and fear that I would screw up somehow.

3) And I need to remember, above all else, that while I may have contributed to it, I do not hold any rank AT ALL. There are no rules that govern who civilian spouses can hang out with, period. Any “rules” that are in place, are simply ones we have put on ourselves. Your servicemember can not get “in trouble” because you are friends with a PFC spouse or the spouse of a General.

Every single spouse, regardless of their servicemember’s rank, has similar experiences, struggles, joys, and heartache. We should all be there for each other, not matter what is in box ____ on their LES.  But, here is the biggest lesson that I have learned from my dear friend, “The High-Ranking Officer Spouse”.

She lives in a much bigger and much nicer house than I do.  Her husband makes a whole lot more money. But, she still has to send him off to war. She still has to see her kids struggle with Daddy being gone. She still cries at night because she is lonely.  She still feels anxiety about R&R and Homecoming dates. She still has to pack up her entire life, her career, say goodbye to friends, and start all over at another location… every couple of years. Movers still damage that antique piece of furniture her grandmother passed down. She still feels like the new kid at school when she moves. She still is judged based on what rank her husband wears and people treat her differently because of it.

A higher paycheck does NOT make any of those things easier to bear.

The focus of the “don’t wear rank” debate seems to be aimed at senior enlisted and officer spouses. And yes, I have had more than my fair share of experiences with spouses of “higher rank” who have treated me poorly. Perhaps this was because they felt they were too good to be associated with me. Perhaps they felt entitled to have a “high-ranking” group of friends.

Or perhaps they are just not very nice people… military life or not.

But the same rings true at the other end of the spectrum. If we judge another spouse because he/she lives in a nicer home or their servicemember has a nicer paycheck… then we are doing the exact same thing. If we treat another spouse poorly because we assume that they simply cannot understand our lot in life because their spouse doesn’t have to serve duty… then we too are a part of the problem. If we think we are “not good enough” to be associated with someone…we are making them feel left out and lonely as well. If we only surround ourselves with a group of friends in the same “rank pool”… then we are just helping to widen the divide.

My friend, “The High-Ranking Officer Spouse” is one of the most genuine, caring, fun-loving, honest, and all around delightful human beings I have ever had the pleasure of meeting. Unless you KNOW who her husband is… she is not going to divulge that information. On most days you will see her taking children to school, pursuing her own career goals, shuffling between homework and soccer games, volunteering her butt off to help other spouses, or making baked goods for every soldier who has a birthday that month. She is the person who does something nice, just because she saw a little gift and thought of you. Or because she wants to celebrate a moment in your life by sending you flowers, or stopping by with a home cooked meal.  She is genuinely happy and excited to share in the successes of her fellow spouses with zero agenda. If she has a jealous bone in her body…she is a master at hiding it. In her, I know that I will have a lifelong friend, and I cherish her. When she reads this, I know it will make her cry, she will probably send me a beautiful thank you note, and she will feel like I am gushing over her in a way she doesn’t deserve. It’s because she considers herself to be “just another military spouse”. She wakes up every morning trying to get through the day, and lays her head down at night hoping she did one or two things right. Just like every single one of “us”.

What has my friend, “The High-Ranking Officer Spouse” taught me? That we really are all in this together and we need to ALL own that.  No matter what rank your servicemember wears, no matter how long you have been a part of a military family, no matter what paycheck is deposited into your bank on the first and the fifteenth, and no matter WHAT size house you qualify for on base… we are all military spouses. And we will all be better served to remember that.