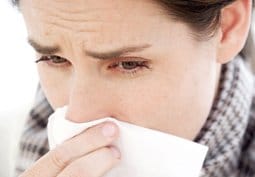 Dread it all you want, but there’s no escaping flu season. Every  year, like clockwork, it returns: a miserable six-month stretch defined  by sniffling, sneezing, a sore throat, and all-over achiness. Brace  yourself, because the flu is expected to strike by October, and the  vaccine is already arriving at doctors’ offices and other clinics.

As  anyone who’s been sidelined by flu knows, it’s as contagious as it is  unpleasant. The flu typically spreads via a respiratory route: We catch  it and then breathe the virus onto others. “If someone gets in your  breathing zone—within about three feet—they’ll likely inhale it and get  infected too,” says William Schaffner, chair of Vanderbilt University’s  department of preventive medicine. “The tricky part is that you won’t  start to experience symptoms for about three days, but at day number two  you’re already spreading it to your friends.”

With all those germs comes lots of misinformation. We bust 8 common myths about flu season below.

And, if you want more help avoiding the flu, check out ImmediateClinic.com’s tips: “‘Tis the Season for Influenza: How to Protect Yourself“.

The flu is no worse than a bad cold

Au contraire, it can be downright dangerous. Yes, there’s the standard  congestion, cough, body aches, and fever. But there are more serious  complications, too, like developing pneumonia and other secondary  bacterial infections. Flu lands around 200,000 people in the hospital  every year, and kills an estimated 30,000 Americans annually.

You can catch the flu from the flu shot

“No, no, a thousand times no,” Schaffner says. The vaccine can cause  flu-like symptoms, including headache or even a slight fever. But it  won’t actually cause the flu—it’s made from a dead virus that can’t make  you sick, after all. Yet many people swear they get flu right after  being vaccinated. That’s because the flu shot is typically given as  respiratory viruses are already circulating, so it only makes sense that  some people will catch a bug right away. It takes about two weeks after  getting the shot to develop immunity.

Not  necessarily. If you’re nervous, opt for a nasal spray or an intradermal  vaccine, which uses a shorter needle and is injected just under the  skin instead of into the muscle. “It’s a much milder option for those  who are needle adverse,” Schaffner says.

Not  true. “Cold weather and exposure to rain and [dampness] will certainly  make us miserable, but will not cause the flu or even the common cold,”  Schaffner says. “It’s everybody’s grandmother’s favorite notion.”

Vomiting is par for the course when you have the flu

Not  unless you have the “stomach flu,” as it’s commonly called, which is  actually caused by an entirely different virus. The very contagious  norovirus brings stomach pain, nausea, diarrhea, and vomiting. “Calling  it the stomach flu is a misnomer,” says Philip Tierno, a clinical  professor of microbiology and pathology at the NYU Langone Medical  Center. Influenza itself won’t cause stomach pain or vomiting.

Antibiotics are necessary to get better

False—these only fight bacterial infections. Since the flu is caused by  a virus, antibiotics won’t help. However, antivirals like Tamiflu can  lessen sick time and symptoms if they’re taken within the first 48 hours  of being infected. “That’s a pretty tough thing, because most adults  who get the flu don’t start thinking about going to the doctor until day  three,” Schaffner says. That’s why doctors typically tell patients  whose underlying conditions—like diabetes—hike their risk of developing  flu complications to call the office the moment they start feeling sick  during flu season. “The doctor will phone in a prescription for  Tamiflu,” Schaffner says. “It’s a very sensible way to proceed.”

After getting vaccinated, all you can do is hope for the best

Actually, there’s plenty you can do. Wash your hands frequently and use  a disinfectant to wipe down any shared spaces. If you notice that  someone is sniffling, stay about 10 feet away and politely decline  shaking hands with or hugging that person, Tierno suggests. And take  care of yourself: Getting enough sleep, exercising, and eating a healthy  diet will keep your immune system strong, helping to fend off germs.

False. Everybody  needs it. The government recommends that all Americans 6 months and  older get vaccinated. It’s particularly important for young children,  older people, and those with weakened immune systems. “Sometimes the  vaccine isn’t a perfect match, but at the very least, it provides  partial protection,” Schaffner says. “That’s very important because it  keeps a mild illness from turning into a serious one. We see gravely ill  people coming into our ER and being sent to the intensive care unit  because they weren’t vaccinated. If they had been, they might have been  at home miserable—but they wouldn’t have been on a stretcher or [been]  put on a ventilator.”

More ways to keep yourself in good health: