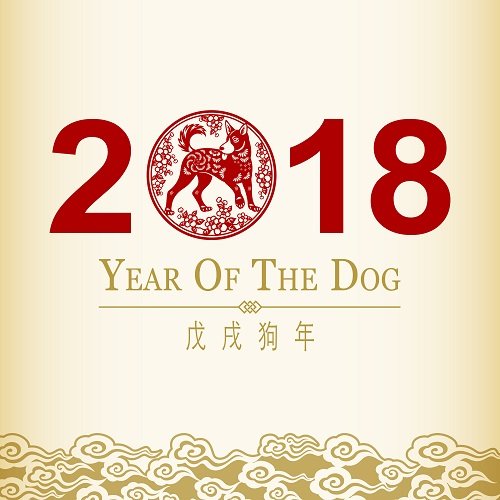 Goodbye Rooster. Hello Dog! That’s right folks, the Year of the Rooster is now officially over as we enter into the Year of the Dog, which is set to start on Friday, February 16. The celebration extends far beyond Friday night, though. People from all over the world will be celebrating Chinese New Year — also known as the Lunar New Year or Spring Festival — for 15 days!

The name Chinese New Year itself is a bit misleading since China is not the only country celebrating a new beginning. Malaysia, Taiwan, Vietnam, Singapore, Laos, and others will hold similar celebrations. In a rare overlap of global parties, South Korea will be hosting the Olympics in PyeongChang as they ring in the New Year. In total, nearly one-sixth of the entire world’s population will be celebrating the Lunar New Year this week, not just China.

So why are some people celebrating the New Year in February, nearly a month and a half after January 1, 2018?! Well, as the name “Lunar New Year” suggests, this New Year’s schedule follows the movements of the moon. The Janaury 1 New Year’s parties adhere to the Gregorian calendar, which follows the movements of the sun. The moon-based calendar can be traced all the way back to the Xia dynasty. One problem with the lunar calendar, though: it’s not quite as consistent as the solar one. As a result, the Chinese New Year can fall anytime during the first half of February.

In case you needed any more reason to celebrate and pamper your pup, this is literally their year. Well, kind of. Each year in the Chinese lunar calendar is named for one of the 12 animals of the Chinese zodiac: the Boar/Pig, the Rat, the Ox, the Tiger, the Rabbit, the Dragon, the Dog, the Snake, the Horse, the Sheep, the Monkey and the Rooster. Each animal in the zodiac has its own unique traits and qualities; similar to horoscopes for Leos and Capricorns. Whatever animal was in charge during your birth year can seriously impact your character and behavior.

For those born during the lunar years of 1946, 1958, 1970, 1982, 1994, 2006, and now 2018… congratulations, you’re Dogs (unless you’re a January baby then you were born just a bit too early). Also, you keep pretty good company. Other famous folks born during the Year of the Dog include Bill Clinton, George W. Bush, Donald Trump, Steven Spielberg, Madonna, Michael Jackson and Justin Bieber.

Much like how we think of pet dogs, people born during these years are said to be loyal steadfast, sincere, honest, and compassionate. That’s a pretty good review. Unfortunately, although returning to the Chinese zodiac sign of your birth year might seem like a good omen, it’s traditionally associated with a year of bad luck. A whole entire year?! Sheesh. One bad year every 12 isn’t the worst ratio, but it’s not the best one either. To all the Dogs out there, be careful with any big decisions you’re making this year. Be very careful.

You don’t have to catch a flight all the way to Asia to join in the Spring Festival. Many major cities across the United States will be holding celebrations in their Chinatown districts and elsewhere. There are even plenty of fun celebrations and traditions you can enjoy at home. The beginning of the new year is all about family, fortune, and new beginnings. So fireworks, feasts with family, and fiery red lanterns are all major parts of the festivities.

Chinese New Year is approaching. Have you put your decorations up? Watch #Instavideo:https://t.co/TWumTL5Zyr pic.twitter.com/Gt2TxRUgX7

Happy Year of the Dog! We hope it is full of blessings for you and your family.

What are your big plans for the Chinese New Year? Do you have any? Let us know in the comments., or share your story!