A Military Family, Past and Present 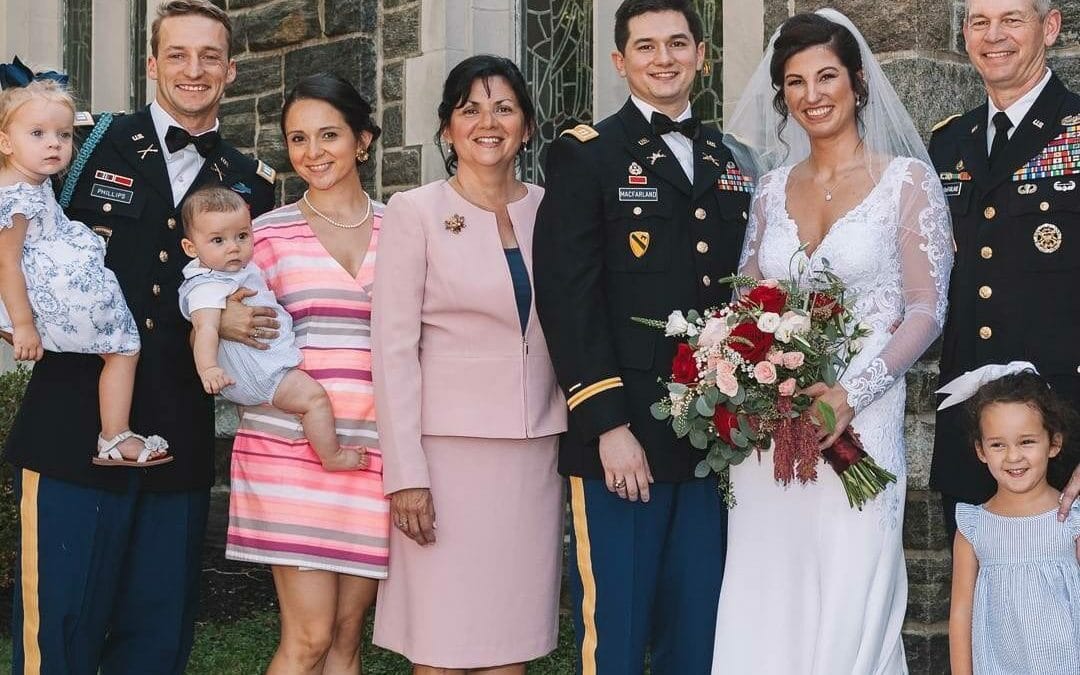 Like many military family members, Veterans Day holds a special place in my heart. I’m not only a military spouse, but the daughter of a servicemember, and the sister of one. I’m also the daughter-in-law of a Veteran, and the granddaughter, and great-granddaughter.

A friend in college once described my family as “The Royal Tenenbaums of the Army,” and I’ve definitely mined my military life for laughs when I got started in stand-up through the bootcamp Armed Services Arts Partnership’s Comedy Bootcamp class. By far, some of the biggest, best laughs I’ve gotten have been when I’ve stolen jokes from my late paternal great-grandmother, Harriet.

She was an Army wife of many decades, having married my great-grandfather shortly after his graduation from West Point. He was gone a lot (no surprise there), but according to her, it wasn’t all bad. “World War II and Korea saved our marriage,” she was known to say.

“I would have loved to have had a mother like you when I was growing up,” one passenger remarked to Harriet. Likely expecting a compliment, she asked why. “Because,” they replied, “You have no idea where your children are.”

My great-grandfather’s first Army assignment was Fort Bliss, where Harriet’s portrait appeared in the local newspaper. She was described as a “delightful addition” to the social life of the post. Nearly a century later, her grandson would be in the paper in El Paso with his wife and daughter, and his own grandchild.

It’s that thread of continuity that makes me so proud of my Army family history which, like all history, hasn’t repeated itself, but has occasionally rhymed. When I was growing up as an Army brat in Germany, we visited the house in Berlin where my grandfather had lived with Harriet and his family as a child. So enmeshed was our family history in military service, it seemed the most natural thing in the world to me that my grandfather’s family had been stationed in Germany. After all, didn’t I have cousins who had been stationed in Germany, too, since my dad’s brother was also in the Army? As far as I knew, a stint in Germany was a standard rite of passage.

Of course, my time in USAREUR (as it was then called) differed markedly from my grandfather’s. Where I went to Europa Park and Schwimmbaden on weekends, and often lived in a little America on post, my grandfather and his friends walked around ruined houses with a wagon and collected artifacts from their former inhabitants, oblivious to the unexploded ordnance that might be lurking nearby.

I’m fiercely proud of my biological military family — my maternal grandfather was a Korean War draftee who also served at Fort Bliss, where he met my grandmother — so without the Army I literally wouldn’t exist. I have several cousins and more in-laws who have served, as well.

But while Harriet’s stories and the experiences of my many relatives who have served are an endless source of pride, fascination and, yes, amusement, there’s also the military family we’ve chosen. My parents’ friends, the friends and their spouses who my husband and I have met throughout his career, and the friends I made as an Army kid at various assignments, all form little villages that span the world over. We pick up where we left off right away, which is something you can only do with people who you know deeply and who know you, who share with you a bond of similar priorities and values of loyalty and service.

What is often missed by many who don’t have a connection to the military is the extent to which Veterans Day is a celebration of family and community. As the nation honors the service of the men and women of the United States military, my hope is that they will see them as real human beings with parents, siblings, significant others, and a network and community of friends and people who care about them.

Maggie Phillips is an Army spouse and mom of three. She writes for Tablet magazine as part of a grant from the Arthur Vining Davis Foundation to increase religious literacy. Her work has appeared in The Leaven, the newspaper for the Archdiocese of Kansas City, Army magazine, NextGen MilSpouse, Military Mom Collective, Military Spouse magazine online, and elsewhere. When she can get a babysitter, Maggie also does stand-up comedy, a subsidized hobby that usually just about pays for the babysitter. Follow her on Instagram at @maggies_words, on Twitter at @maggiemphillips, and at mrsmaggiephillips.com. Opinions her own.