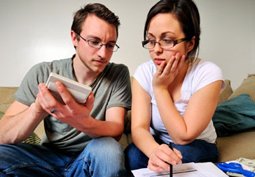 Younger Americans not only borrow heavily on their credit cards, but they repay the debt at slower rates than previous generations, new research from Ohio State University finds.

The findings suggest this bleak situation: the typical young credit card holder who keeps a balance on the card will die in debt to credit card companies, said Lucia Dunn, an economics professor at Ohio State who was a co-author of the study with Sarah Jiang, manager of credit and business strategy at Capital One Financial in McLean, Va.

If such behavior persists, Professor Dunn said, the country may eventually be faced with a financial crisis among elderly people who can’t pay off their credit cards. “They’re paying it back at much slower rate than previous generations,” she said in a telephone interview.

The study, published in the January issue of the journal Economic Inquiry, is based on two large, long-term monthly surveys conducted by Ohio State University, including one that includes not only borrowing data but also payoff data, which hasn’t previously been available to most researchers. The data allowed the researchers to more precisely estimate when Americans will be able to pay off their credit card debts.

Professor Dunn said there were several reasons why younger generations have higher credit card debt. Credit is more readily available, for one thing, and attitudes toward debt have changed. “It’s a lot more socially acceptable to have debt and go into bankruptcy,” she said.

Younger people now also have much higher levels of student loan debt than previous generations, she noted, which makes it harder to pay off card debt.

But the study also offered some hope, in that it found that increasing the minimum required monthly payment on credit cards spurs borrowers to not only meet the minimum, but to pay off substantially more, possibly eliminating their debt years earlier.

Would higher minimum payments motivate you to pay off your credit card debt? Or would they force you into default?