Military Spouses: Learning You Are Not Alone 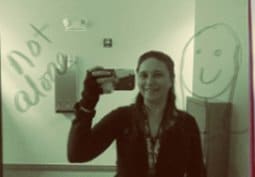 I’m an introvert by nature. I have very few close friends. I don’t need to surround myself with a lot of friends. I love deeply and am very loyal to those who are my friends. I tend to be the wall flower at large gatherings. I will have an anxiety attack if there are too many people or too much noise, like say the mall. I think before I react. I like quiet and alone time.

There are those times where I *need* the company of someone if only to vent, lean on, or just hang out. The problem has always been that I’m not very good at making friends. Because I’m quiet and the wall flower, because I think before I speak, and because I am deeply emotional, I think strangers view me just plain snobbish. I have actually had friends tell me after they’ve gotten to know me that their first impression was that I was stuck up. This does nothing for my self-image and ability to make friends, for sure.

My husband has always been the friend-maker for us. He was the one who opened conversations and found our niche. But after his accidents, when his pain started to get out of control, it took him away from his life. After getting out of the Army, with his history of pain and medication, calling in sick, leaving work early, all added up to him not being able to get or keep a job. Not only did the pain force him into isolation, but so did not having a job. Our circle of friends dwindled and when we moved to Florida we had to start all over again. We had no friends here, and continue to have none.

I thought maybe when our son entered school we could meet some new friends. The problem with that, though, is that we started late. We didn’t have our son until we were 33. Now that he’s in school, the parents of children his age are at least 15 years our junior. What could we possibly have in common with them? Add to that, the lack of understanding what military life is like. Or when we do find military, it’s a trigger for his guilt, his anger, and his depression, as well as the loss of his dream.

We tried getting involved with some families at school, we’ve tried getting involved with the Boy Scouts and hoping to find friends in anything we could. But my husband’s pain limited his involvement. Doing anything strenuous triggered his pain. Being outside in the bright sun triggered his migraines. No one understood. And no one wanted to. They looked at him, and me, with disdain. One person even was so bold as to say, rather snottily, “Well, you don’t *look* disabled.” And that cut him so deep and it has yet to heal.

How can I explain to someone that it really is a disability if they can’t see it? How can I explain to someone what we deal with on a daily basis? His impulse control issues, his anger issues, his pain, his medication, his memory issues? How can anyone possibly understand, without being judgmental, what all is involved with the invisible wounds of chronic pain, of PTSD, of TBI? How can anyone understand without living it?

Because none of the other acquaintances ever went further than the social gathering we were involved in, it was hard to express those things. I’m guarded with my troubles to begin with, never wanting to air dirty laundry, start drama, or show weakness. So my explanations were brief. People never pried too deep. They looked at me with pity, never inviting us to do more with them outside the organization we were mutually involved in.

It never really bothered me…much. Sure I missed the friendships we once had. Sure I missed doing things outside the house. But it wasn’t until I had my breakdown, when I really needed someone to talk to, who understood everything I was going through, did I truly feel alone.

My only friends now lived in the computer. They were on Facebook and Twitter. Some were friends I had as a child I met up with through the beauty of the internet. Yes, we were all close…once. But now I felt like a stranger to them. Others were writing friends. If ever I spoke to any of them about the problems I had living my life, many of them would think my husband was a horrible person, that I should have left him a long time ago. They could not understand, would not understand, everything that goes along with each diagnosis. Heck, we didn’t understand it and we were living it.

I couldn’t go to my best friend, the one person who’s always been my strength for the last 24 years, my husband. I couldn’t show him just how weak I was because *I* had to be *his* strength. If I couldn’t be strong for him, I couldn’t hold the family together, to keep him from giving up. So I kept it all inside.

The problem is that there’s only so much one person can take. Everyone has their breaking point. And I had mine about 4 months ago. I fell into a deep dark abyss. Panic/anxiety attacks were a constant occurrence. The insomnia started. And when I could get to sleep, the bad dreams visited. I had no energy for anything. My creativity faltered. My novel has been on hold since. I dreaded going to work. I hated lifting a finger to make the house presentable. All I did was lay on the couch and stare at the TV.

The worst part was, I was alone in my own house. My son is obsessed with Minecraft and Terraria so he spent most of his Christmas vacation on the computer. My husband, his sleep schedule did a complete 180. He was up all night, and slept most of the day. When he was awake when we were awake, he was upstairs playing with our son on Terraria or Minecraft. I was left downstairs…alone.

Over the Christmas holiday, I managed to get sick. It must have been something I ate, food poisoning. I couldn’t go far from the bathroom as I was going every 20 minutes. But when I told my husband it was bad, it must not have registered with him. Or, maybe, I just didn’t stress it enough, or explain it well enough for him to comprehend. It wasn’t until 2 days later that we finally went to the urgent care and got some medicine. But the whole time I was sick, they both stayed upstairs playing on their games, leaving me alone…

It was disappointing that no one took care of me when I was sick. I was angry. I was sad. I also felt a little selfish. Maybe I was just unworthy of anyone caring for me.

But most of all I felt so alone.

I made a point to go searching for caregiver groups. Maybe someone, somewhere, would understand. But everything I ever found was caregiver groups for aging parents, dementia, and Alzheimer’s. I still couldn’t find a caregiver support group for someone taking care of a veteran, who wasn’t in their 60s, who could empathize and understand my position.

It wasn’t until a long-time friend mentioned Secondary PTSD to me, said I should research it. I didn’t even know there was a real thing. But there is. I wanted to know if the VA could help *me* since I’m dealing with my husband and his PTSD diagnosis and I had been spiraling out of control, falling down a deep dark pit of despair myself, all because I was overwhelmed with dealing with everything and feeling hopeless to change it.

I searched again for caregiver support, but tacked on the words “veteran” and “military”. This time, though, I found a lot of things dealing with this only it was specifically designed for veterans suffering from TBI and PTSD from Operation Iraqi Freedom and Operation Enduring Freedom. How frustrating that these groups were so segregated. Or so I thought.

Eventually I found out that the VA has a new program called the VA Caregiver Support Program. And that’s when everything exploded. Well, not quite. I first had to get over my fear or new people, my fear of looking weak, my feelings of selfishness because there’s so many people out there that are so much worse off than we are, and the feelings that I just wouldn’t belong because it was only for those people who were a part of OIF/OEF.

It took me two weeks to get up enough nerve to call the VA Caregiver Support Program. But when I did, I found out that there are things I could participate in because my husband was a veteran and I was his caregiver. There are still some things that I am on the fence about, like applying for the stipend. But that may come later. I signed up for an online group, as well as an in-person workshop the VA had. Now, if only I didn’t chicken out about the in-person one.

I knew I needed help. I also felt like I couldn’t let people see me at my weakest. So I struggled daily, inducing many anxiety attacks, trying to convince myself I *had* to go to this workshop. And I’m so very glad I did.

I met some lovely women who were going through some very similar things. It opened my eyes to see that their veteran exhibited the same symptoms. I was so very relieved that I found out I really wasn’t alone, that people *did* understand.

The door had been opened. My spirit started to lift and I could finally see a glimmer of light off in the distance. Because I was persistent in my quest to find something that could relate to me, I did. Because I forced myself to reach out, to contact someone who might be able to help, they could. Because I forced myself to overcome my anxiety and go to that workshop, I found others in similar situations. Because of that workshop, I found websites, forums, Facebook groups, all who understood. They became places I could go and talk about my husband’s issues and my own trenches. No one judges. Everyone understands.

I am no longer alone. And you are not, either. If ever you feel that way, need an ear or a shoulder, please don’t hesitate to contact me. I am very willing to listen, without judging, offer you my support and share with you my experiences.

Read more inspiring and supportive posts from Lady Jai on her blog, Caring for My Veteran: My Journey to Find Healing Through Writing.