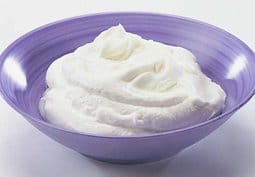 One of our oldest foods, the bacterial ferment of cow’s milk has been reinvented in the U.S. as a health product bordering on panacea. And while there’s disagreement over whether any foods should be allowed to make medical claims, the public seems slow to object.

Why yogurt? Why now?

And can (should?) anything be done to stop it?

1900s: Russian scientist Elie Metchnikoff identifies a population in Bulgaria that subsists heavily on homemade yogurt. A Nobel Laureate, he pioneers the study of what will later be named probiotics (Latin: “for life”), live bacteria believed to do great things for the bowel when introduced via food.This is the first time that anyone’s thought of bacteria as a good thing. Metchnikoff believes it’s the high quantity of probiotics found in fermented milk products, like yogurt, that are responsible for the Bulgarians’ good health and long lifespan. He prefers sour milk.

Among the Bulgarians where yogurt is a part of each meal but where diet is not outstanding in other respects, the life span is longer than that of any other peoples in the world; Bulgarians are credited with retaining the characteristics of youth to an extremely advanced age.

1980s: Frozen yogurt happens. Americans weren’t ready for its tart taste when the dessert first surfaced in 1972, but by the 1980s, food scientists had figured out how to make it sweet. The sell: it’s like ice cream, except you can eat as much of it as you want. It’s just pure healthy carbohydrates.

Seinfeld voices the insecurities of a generation (George: “How can it not have any fat? It’s too good!”) in a 1993 episode.

1991: An “aura of health” has officially descended upon the frozen variety of yogurt.  Americans are thrilled: a “homemaker and sculptor” from Short Hills, New Jersey tells The New York Times that she eats frozen yogurt daily. She adds, echoing Metchnikoff, “You know, if you eat yogurt you’ll live to be 100.”

David Bandler, a professor of food science at Cornell University, argues that this is mere illusion. “Frozen yogurt is not yogurt; it’s a frozen dessert,” he insists, explaining that most varieties don’t contain the bacteria cultures that give yogurt its healthful properties. The same, James Hamblin points out more recently, goes for yogurt-covered raisins.

2003: A study concludes that “dietary supplementation with yogurt is a simple, effective, and safe treatment that decreases the incidence and duration of antibiotic-associated diarrhea.” Doctors are advised to prescribe one cup of commercial yogurt per day for patients on antibiotics.

2006-7: The question of which came first — Red Mango or Pinkberry — may never be solved, but by now “all-natural” frozen yogurt has become the “it” dessert/snack/meal replacement.

As the names chosen by them and their countless imitators oh-so-subtly suggest (shoutout to Yogurtland, Berrywild, YogurtBerry, Berry Line, Yo Berry, Roseberry, Snowberry, Berri Good, Sweet Frog, FroZenYo, Orange Leaf, and Cantaloop), they’re healthy because they have fruit in them. This more blatant play on yogurt as health food also emphasizes the treat’s “live and active” bacteria. And it goes so far as to celebrate the tart-ness, which more closely recalls the original health food: non-frozen yogurt. It’s precisely because consumers perceive it as healthy, according to Red Mango CEO, that frozen yogurt shops thrive during the economic recession.

April 2008: After being sued for not meeting the legal definition, Pinkberry is approved as actual “frozen yogurt.” The delay is attributed to their product not having as much bacteria as advertised; they tweak their recipe and earn the coveted “Live and Active Culture” seal from the National Yogurt Association.

2008: Activia, the yogurt that (allegedly) makes you poop, hires Jamie Lee Curtis for the campaign that launched a thousand spoofs.

Yogurt’s probiotics are said to be good for your skin when consumed normally, so applying yogurt directly to your skin must be even better. The practice may have existed for thousands of years, but Greek beauty brand Korres turns it profitable with a line of yogurt-based skin products. A 1.35 oz jar of cream made with full fat Greek yogurt currently retails for $32. For a cheaper variation, Stonyfield recommends those looking for a yogurty glow simply set aside a portion of their breakfast for rubbing on their face.

2009: In a rare setback, yogurt is deemed unsafe for commercial flight. (In early 2013, I convince a TSA agent that the flight risk posed by the container of Dannon Light & Fit in my travel bag is nothing compared to the trauma he’d cause by taking it away from me. The yogurt is allowed on the plane; the flight goes smoothly.)

December 2010: Dannon pays a $21 million settlement to the FTC , agreeing to specify that Activia only helps digestive health if eaten three times per day.

2011: The winning combination of extra protein and no fat allows Greek yogurt to become the greatest to ever happen, despite being twice as expensive as thinner varieties. Is the fact that it’s more expensive actually driving the boom in sales — 2500 percent from 2006 to 20011? Or, asks The Atlantic’s Derek Thompson, is it because it’s cheap compared to similarly creamy and indulgent-tasting foods? Of course, it’s also seen as healthier than ice cream, custard, and the like.

“Powerful,” the yogurt that’s marketed to look like a protein bar, promises to help men find their inner abs, and is best consumed just as you would other yogurt, but also after the gym. It may also boost sperm count — a claim that had been removed barely a day after the Internet got wind of its existence (fortunately, The Atlantic Wire grabbed a screen shot).

What’s next: At this point, yogurt can only go one of two ways. Either a swift, merciless backlash takes down not just Greek yogurt, but the idea of eating fermented milk in the first place. Or, yogurt of all forms completely takes over, becoming the only thing anyone would even consider eating. Eventually, we achieve immortality.