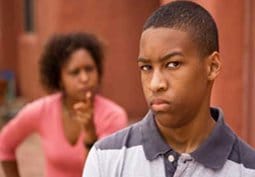 Sometimes pre-teens and teenagers know just the right way to push your buttons. It happens to every parent at some point; maybe they have caught you on a bad day or they just have that knack for grinding away at your nerves on a regular basis. Either way, your instinct is to yell at them and tell them to “STOP!” whatever it is they’re doing.

Researchers at the University of Pittsburgh and University of Michigan conducted studies claiming that yelling at your teen can make their bad behavior worse in the future. The effects of yelling at teens are comparable to physical means of punishment.  For example, spanking children has become frowned upon in our society in recent years; a taboo method of disciplining children. In recent years, spanking kids has been seen as abuse with lasting emotional effects. Yelling at kids, however, doesn’t yet have the same stigma.

The behavioral problems researchers found to be associated with tongue-lashings and intimidation methods were an increased risk of depression and aggression. A positive relationship with parents and a loving, supportive situation at home did not reduce the effects of yelling as a form of discipline.

The study was carried out by observing 976 teenage participants, ages 13 and 14, and their families.  Findings from multiple tests designed to measure the effects of severe verbal punishment found that teens’ emotional development and behavioral habits were greatly impacted by this form of punishment.

Researchers predict that the effects were so dramatic because early teen years are a time when individuals are very impressionable trying to develop their identity for adult-life.

Findings from the study will be published in the Child Development journal this spring.

What forms of punishment do you find effective for your children?