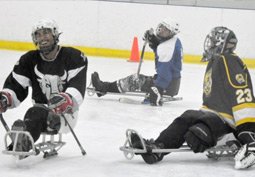 Sweeney, a bilateral amputee, said he’s looking forward to a hard-won victory on the ice.

“If we play our game, we’ll be unbeatable,” said the former Marine, who is hedging his bets by training up to four hours a day in Colorado Springs.

Sweeney said he’s still amazed to have made it to this point. Just a few years earlier, the former high school hockey player from Phoenix, Ariz., figured he’d never be back on the ice again.

In October 2009, then-Sgt. Sweeney was on patrol in Afghanistan when he stepped on an improvised explosive device, known as an IED. He ended up losing both legs above the knee and suffered left hand and right arm injuries.

While in the hospital, he struggled to come to grips with the loss of his favorite sport.

“The first thing I told my mom after being injured is, ‘Oh, man, I’m not going to be able to play hockey anymore,'” he recalled. “It was very upsetting.”

Still, Sweeney never lost his passion for the game. During recovery, he heard about a sled hockey team offered through San Antonio Rampage ice hockey team and the nonprofit Operation Comfort. The bulk of the team is wounded warriors, both active duty and retired, who took up the sport while undergoing rehabilitation at Brooke Army Medical Center’s Center for the Intrepid, or CFI.

“It works on their conditioning, their balance,” he said. “Plus, it gives them confidence when they’re able to accomplish something they never thought they could do.”

Sweeney was determined to get back on the ice, “but this time I wanted to be the player I never was in high school.”

After working to improve his puck-handling skills, Sweeney tried out and made the National Team as a forward in 2011. Since then, “I’ve become one of the point leaders on the team,” he said. “It’s been awesome to see so much progress in a short amount of time.

“Honestly, sled hockey saved my life,” he added. “If I didn’t have it, I’d be going through the motions. Now I want to motivate others to achieve, to see how this kind of work ethic pays off.”

Unlike Sweeney, Roman had never given ice hockey much thought when growing up in Portland, Ore. He gravitated to football and wrestling in high school, before joining the Army in March 2001.

Roman was injured in Iraq in 2007 after serving at a vehicle checkpoint. He was riding back to post in the lead vehicle of a convoy when it struck an IED, causing injuries that led to the amputation of his left leg above the knee.

While in recovery, the CFI staff suggested he try out sled hockey.

“I wasn’t sure about the sport, but it turned out to be fun, like football on ice,” he said. “It helped me so much to focus on something positive.”

Roman tried out for the 2010 Paralympic Team but didn’t make the cut, which made him even more determined to try again. The following year, he made the National Team.

The sport wasn’t as much of a stretch for Lee, an avid athlete who had played inline hockey along with a host of other sports while growing up in California.

Lee was injured in a motorcycle accident in 2009, and lost his left leg above the knee. During rehab at the CFI, the San Francisco native explored several sports options, including wheelchair basketball and sled hockey.

“I told my wife, ‘I haven’t even put on a skate or touched a puck since freshman year of high school,'” Lee said in an earlier interview with U.S. Army Installation Management Command. “I was definitely excited and nervous at the same time. As soon as I got on the ice, I was just like ‘wow!'”

Lee joined the Rampage sled hockey team in 2009, and the National Team in 2010. He then joined the U.S. Army World Class Athlete Paralympic Program. He’s a standout this year as the first active duty Soldier selected for a Paralympic winter sports team.

In just a few weeks, Sweeney, Roman and Lee will help defend the U.S.’s gold medal from the 2010 Winter Paralympics in Canada. Their tournament will begin March 8, as they take on the Canadian team, with the gold medal game scheduled for March 15.

Roman said he’s got his eyes on the highest prize. “A gold medal would mean a lot to me and also to my team,” he said. “It would be a great feeling to win any medal, but hopefully it will be gold.”

A gold medal, Sweeney added, would be “validation that all of the hard work has paid off.”

Back at Brooke Army Medical Center, staff members and friends will be watching and cheering on the warrior-athletes from the moment they glide onto the ice.

“I am very proud and happy for them,” Jesse said. “I have no doubt they will play an important part in bringing home the gold medal.”