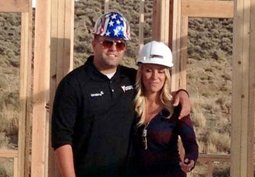 RENO, Nev. — A Marine who has undergone 22 surgeries and lost a leg since being critically wounded in an explosion in Afghanistan is getting a big boost in rebuilding his life in Nevada.

A group of volunteers raised the support walls Saturday for a Reno house being built for Sgt. Thomas “Trey” Humphrey and his wife, Lindsey.

“It’s very humbling,” Humphrey said. “I don’t think there are words to explain how someone feels when they have been given a new home. It doesn’t seem real to me. In fact, it’s very surreal and very amazing all at the same time.”

Humphrey, 29, a graduate of Foothill High School in Henderson, suffered severe leg, arm, facial and brain injuries when he stepped on an improvised explosive device in Afghanistan in November 2010. His squad was trying to maneuver on an enemy machine gun position at the time.

He has spent the last 18 months undergoing nearly two dozen surgeries at Balboa Naval Hospital in San Diego. Doctors have taken muscle and tissue from his back in order to save his left leg. He requires a brace for his left leg in order to walk at this time, and has been fitted with a prosthesis for his right leg, which was amputated below the knee.

The 1,739-square-foot home, valued at $275,000, is being donated to the couple as the first such project sponsored by the Reno chapter of the Texas-based organization Defenders of Freedom.

Some 40 local companies and individuals have donated over $200,000 in cash, supplies and services for the Reno home to date.

According to its website, Defenders of Freedom awards homes mortgage-free to the most severely wounded service members in Iraq and Afghanistan so they can live more normal, independent and productive lives as they adjust to changes spurred by combat.

“As American citizens, it is our responsibility to support the military and their families as they try to rebuild their lives in our hometown,” said Charles Bluth, founder of the Reno chapter of Defenders of Freedom and former owner of the Cal Neva Lodge on Lake Tahoe’s north shore.

Bluth jump-started the project by donating a lot valued at $60,000 in the Somersett development for the home.

After graduating from high school with varsity letters in baseball and football, Humphrey enrolled at the University of Nevada, Reno, then enlisted in the Marines in 2005. He served two tours in Iraq before being deployed to Sangin, Afghanistan, in October 2010.

The decorated Marine said he wants to put down roots in Reno because he’s an outdoors enthusiast whose main goal is get back on skis.

Asked about his future goals, he replied, “I think five years from now I will have a graduate degree in therapeutic recreation from UNR, a couple of kids, and I’ll be working for the VA, city of Reno or a nonprofit.”