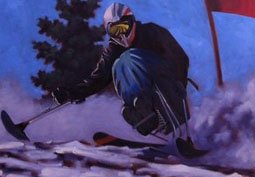 An open letter from an armless Iraq War veteran to the amputee victims of the Boston Marathon bombing has gone viral thanks to his succinct, stirring words which offer a crisp portrait of post-injury life and unbridled hope.

His written depiction of human resilience is entirely within character: without arms, hands or fingers, Pete Damon, a Boston-area resident, later became a painter whose works have been displayed in the Rotunda of the U.S. Capitol.

“Although it’s undeniably tragic, you will recover,” Pete Damon posted on his Facebook page this week. “In fact, this will be a defining moment in your life. In the coming days, weeks, and months, you will find a strength and resilience you never knew you had.”

That sentiment was shared by his Facebook friends, ultimately landing on a military website, picking up fresh social traction from there.

“I just want to make sure they know this isn’t a life-ending event for them. This may be something that brings out the best in them,” Damon said in a phone interview from his home in Middleborough, Mass., about 40 minutes south of Boston. “I’m sure many of them are having doubts and worries about the future. But they can look to us, to the veterans like me, for strength and that everything is going to be fine.”

A former Massachusetts Army National Guard sergeant who grew up in the Boston area, Damon was inflating Black Hawk helicopter tire at a base in Balad, Iraq in 2003 when the wheel and its rim exploded. The blast severed his left wrist and right arm above the elbow. The accident killed Alabama Army National Guard Specialist Paul Bueche, who was 19 at the time.

An amateur sketch artist whose wife once shipped him colored pencils to help fill the lulls of war, Damon later taught himself how to paint in oil and watercolor — with his remaining left arm and a prosthesis. That craft initially made him feel normal, and then became tranquil therapy. His images are peaceful: moonlit harbors, autumn shadows on a white, New England home, a man fishing a rocky point. His pieces do not reflect the ugliness of combat.

“Watching the scene unfold on the streets of Boston Monday afternoon shook me to the core,” Damon said. “In particular, seeing the graphic images of the wounded. Even though I had been through the experience of seeing my own limbs torn to shreds, those images of other victims weren’t easy to process. I immediately felt a sense of kinship with those people.”

He immediately flashed back on a hospital visit he’d received weeks after his horrific injury from a Vietnam veteran without arms, Jerry Miserandino. He watched a video of that same man climbing a rock wall using prosthetics. Damon realized anything was possible in his new body.

“That attitude lit a great fire of hope inside me,” Damon said. “I want to let (the Boston victims) see all the other great examples of veterans who have suffered similar wounds and have gone on to excel at many things. I want them to experience that same hope.”