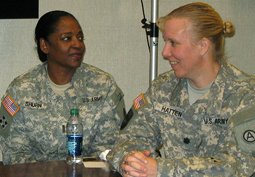 SHAW AIR FORCE BASE, S.C. — Under a poster showing a female soldier in full combat gear and toting an M4 automatic rifle, about 40 Army officers and enlisted soldiers came together last week at their military headquarters in South Carolina to form a mentoring group dubbed “Sisters in Arms.”

Organizers said Thursday’s lunchtime session was the first of many monthly meetings, which they hope will help women navigate a career in the military.

Participants made clear they don’t intend to shy away from tough topics. An introductory slideshow said difficulties such as sexual harassment and rape were open for discussion, as well as family matters, education or getting along in a military atmosphere.

“It’s anything the service member wants to talk about,” said Lt. Col. Stacie Hatten, 43, a logistics officer who appeared as one of eight senior women offering to advise others. “It could be personal, financial, training, education, it could be an array of issues.”

Hatten, who has served in Korea and Afghanistan during her 25-year career, said she thinks women in uniform need to organize in order to support one another “and just build camaraderie.”

The Army is an overwhelmingly male atmosphere. Only 15.6 percent of its 1.1 million soldiers are female.

“We can learn from the experience of our senior leaders and inform each other,” said Hatten, who hails from Clitherall, Minn., is married to a former Army man and has two children.

The rigors of balancing a home life with life in uniform came up in opening remarks from another organizer, Lt. Col. Catina Barnes-Ricks, 40.

The single mother told the group she took an assignment in Korea because she thought it would allow her to spend time with her daughter. However, she was required to work six days a week and spend many late nights and early mornings away from home. She said she was too afraid to discuss her schedule with her commander, and often told her daughter she worked hard to put food on the table.

But her daughter balked one day, telling her mother something that shook her emotionally.

Barnes-Ricks said she hoped the group could learn “there’s a way through every situation” and they shouldn’t be afraid to speak with superiors about difficult family situations. Her daughter is 16 now, and doing well, she added.

The group met at 3rd Army Headquarters. Hatten said the headquarters has about 170 women assigned to it and handles logistics and support for Army forces in the U.S. Central Command region, which stretches from eastern Africa through the Middle East to Afghanistan.

The command was shifted to Shaw last year from Atlanta, which means many at the session have just moved and were getting to know one another.

Several women said they got the idea from a similar meeting held last month at 3rd Army’s forward base in Kuwait. Barnes-Ricks said she hopes the group will be able to have video teleconferences if they need to discuss similar topics for women in both units.

Barnes-Ricks, who has been in the Army 23 years, said she thinks there are similar groups at Army units in Hawaii, Georgia and Kansas, but she’s still researching the matter. In any event, she said she hopes the idea will grow.

“I think it’s a great idea,” said Staff Sgt. Cylenia Harvey, 37, of Brooklyn, N.Y., who came in for the one-hour session. “I think I can really gain some insights.”

The communication security specialist said she’s been in the Army 19 years, but always can learn from such a group.

“It’s really comforting to know because we all have jobs that can be really stressful,” she said. “I really hope a lot of females will feel very comfortable in this forum.”