Women Fitting in on Subs 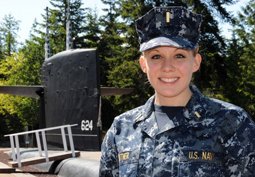 Since reporting to their boats in November, 25 women who broke one of the Navy’s final gender barriers have gone on patrol and been accepted among their crews.

“The men adjusted to us being there, and we adjusted to them,” said Lt. j.g. Megan Bittner of the USS Ohio gold crew. “It was quick. There were no big problems. No stumbling blocks along the way. It was just learning as a junior officer how you fit on the boat.”

Bittner, 24, is one of 13 women assigned to two Trident submarines based at Naval Base Kitsap-Bangor — the cruise-missile-carrying Ohio and the USS Maine, armed with nuclear warheads. Another dozen are in Kings Bay, GA, with the USS Wyoming and USS Georgia. Each have blue and gold crews that take turns operating the boats. There are three women on each crew — two on their first assignments and a more experienced supply officer who serves as their mentor. The Ohio blue crew includes four women because fewer dropped out of training than the Navy anticipated.

It’s not that hard to wash out. After the submariners graduated from the Naval Academy or ROTC programs in spring 2010, they spent six months in Nuclear Power School in Charleston, SC, six months at the Nuclear Power Training Unit, or “prototype,” also in Charleston, and nine weeks at Submarine Officer Basic Course in Groton, CT. At prototype, they toiled 12 hours a day, six days a week in decommissioned subs with working reactors.