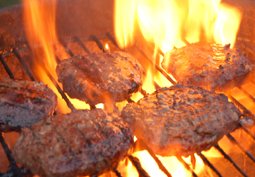 Mongolians love it. So do Bulgarians, Swiss, Belgians and French. But Americans — no way. Eating horse meat is a culinary taboo that started early in our nation’s history and continues today.

Food experts say it’s a distaste that is part emotional and part economic: we love our horses and even if we didn’t, we’re a wealthy country that can afford to eat choicer cuts of meat.

In recent weeks, a scandal over the discovery of horse meat in packages of frozen French lasagna and in processed beef products in Ireland and England has rocked the European Union.

Part of it is cultural; residents of the British Isles have a long detested the idea of eating horses, while the French have found it somewhat of a delicacy.

The second fear is the spectre of bovine spongiform encephalopathy (BSE), commonly known as mad cow disease, a brain-wasting disease that killed nearly 200 people and led to the slaughter of several million animals in the late 1980s.

While there’s no evidence that BSE can move between species, there’s a history of public mistrust in public health officials overseeing the EU’s meat supply.

On Thursday, three universities in Ireland announced that they had discovered traces of horsemeat in hamburgers served at campus eateries.

The ban was lifted in 2011, but several current bills would reinstate the prohibition, according to a 2012 report by the Congressional Research Service.

“Because it’s been such a wealthy and abundant country, we can chose what foods we eat,” Bentley said. “We chose not to consume all parts of animal, and not eating horse has always been one of our choices.”

“We don’t like to eat our pets and Americans anthropomorphize their pets,” Bentley said. “We are close to horses in a way we aren’t to pigs or cows and goats.”

There may be a more practical reason why early Americans didn’t eat horses. They didn’t taste too good, according to Martha Carlin, professor of history at the University of Wisconsin, Milwaukee.

Carlin notes that horses were commonly used as both transportation and to pull farm equipment. That means they were more valuable as beasts of burden than sources of food. Horses also have relatively long lifespans compared to a pig or sheep, for example.

“If you had a horse and worked it for 15 or 20 years and then if you slaughtered it, its meat would probably be pretty tough,” Carlin said.

Carlin said the tradition of eating horse in France, Belgium and Switzerland never made it to the new world. She tried a sample once at a friend’s home in Switzerland.

“It tastes like a quite good beefsteak,” she said.