Who Are You Calling Dependent? 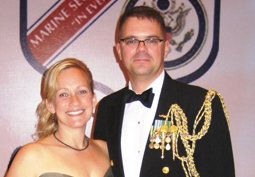 For my civilian readers, before I continue this post, I need to explain an element of military life I have not previously addressed.

In the military, the service member is called the “sponsor” and the family members are called “dependents.”  This vocabulary was established long ago because, in the eyes of the Department of Defense, the service member brings home the paycheck and serves our country and his/her family members are dependent on the paycheck he brings home, the medical coverage his work provides, the commissary privileges, etc.

I never gave the label much thought but recently began to take personal offense to it.  Yes, I’ll admit to being dependent on the things I listed, but when you think about it, would it be possible for me to hold down an actual job, to provide all of these necessities, while my dear husband, the “sponsor,” is deployed and I, alone, am caring for the constant needs of our four young children.  No.  Would he be able to do his job well if he didn’t know I was home doing just that?  No.  Does this make him basically as dependent on me as I am on him?  Yes, I think it does and I think he’d agree.

During my husband’s first deployment, I learned to do jobs I USED to depend on my husband for: lawn mowing, minor house repairs (including toilets), furniture moving (actually, I’ve always done that), and more.  When he returned, I continued to do these tasks, to lighten his load.  The last thing he wants to do after his 16 hour work day is work on a honey do list, so we don’t even have one.  Dependent?  I don’t think so.

When the Navy decides we have to move, yet again, does my husband, the sponsor, organize the house, prep the kids ahead of time and meet the movers?  No, he has to do his Navy job until the day we board a plane or pack up the cars, and he hits the ground running at the new duty station immediately upon wheels down, leaving me, the “dependent,” to: set up the house; register the kids for school; organize electricity, gas, trash pick up; find doctors and meet the neighbors…  Need I go on?  Again, who is the dependent here?

My point is, the service member and his spouse depend on one another.  Obviously, the labels are never going to change, but I think we could find better ones. It would take some thought, but I’m sure there’s one that will fit.  The only one that immediately comes to mind is “co-dependents” and while it might fit, I don’t think it’s quite the image the military would like to project.

Erin is a parenting coach, writer, Navy wife and mom to 4 sons (one who has Autism Spectrum Disorder). She recently parented solo during her husband’s 20 month deployment.  Her boys are 14, 12, 8 1/2  and 5 years old. The Been There Done That Mom offers insight into military family life and no nonsense parenting.