What Can a Civilian Possibly Say? 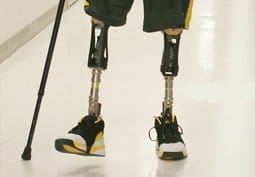 “What Can a Civilian Possibly Say to a Wounded Soldier?”

“Gotta go, something’s exploding over here.” That’s how Anthony had signed off from our Facebook chat session the last time we had talked. He was deployed in Afghanistan, and we had been typing back and forth about how life was going.

How was life going? It could be better, I told him. I’d been broken up with by a man I loved very much, my parents were selling my childhood home, and I couldn’t get the mold out of my shower. Things weren’t great, but nothing was exploding — not literally.

We didn’t speak for a while after that short chat, and back in New York, my life carried on as usual. I was still a little brokenhearted, and my shower was still disgusting. One day, he emailed me out of the blue to say that he would be in New York for the weekend, and wanted to see me. I was delighted to hear from him, and said we should go have dinner together. I’d take him to a vegan restaurant in the West Village, we could have cupcakes for dessert, and then go to a wine bar for some jazz: a lily-livered coastal liberal elite’s night on the town, I joked.

When he called to confirm our plans for the evening, he said, “I’m not that mobile, because I’m still on crutches.” My heart fell, and I asked, as casually as I dared, “What happened?”

A few weeks after our hasty Facebook chat, while out on a patrol in Kandahar Province, Anthony stepped on an IED. He had been deployed for three months. He lived, but only just. He lost one of his legs below the knee, and has since had god knows how many surgeries to stitch up the other damage that was done that day.

When I met Anthony at the restaurant, I improvised. Scriptless, I mostly sat and listened. I asked him questions, trying to be considerate of his feelings without coddling or condescending.

I wasn’t entirely sure how I was supposed to behave in this situation, but before long, one thing was crystal clear: between the operations, the physical therapy, and the post-traumatic stress, this man, this man who is my age, has been to hell and back. He has suffered in ways that my other friends and I, with our break ups and our crappy outer borough apartments, cannot possibly understand.

In her recent bestselling book Drift, Rachel Maddow argues that the process of going to war, of sending troops like my friend into combat, has become far too easy for us as a country. Because we’re so disconnected from what war is like, because it’s so easy to remain ignorant if we so choose, sending troops into armed combat isn’t the wrenching experience it once was.

My parents, who were teenagers during the dying days of the draft, did not have this problem. True, some Americans chose to insulate themselves from the trauma of conscription and war in the Vietnam Era, but most did not, or could not. I cannot condone or call for a return to conscription, but it did have this one advantage: when you were at risk of being sent off to war, you couldn’t choose ignorance and apathy. When the football players you cheered for came home wounded or worse, you couldn’t simply look away. America’s decision to make war hit home, and it hurt.

Read the full story at Jezebel.com