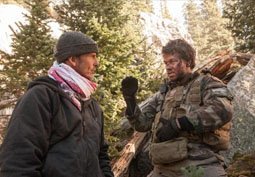 With the real-life lone survivor Marcus Luttrell on hand to train his on-screen counterpart, Mark Wahlberg, Berg committed to getting all the details right, no matter how grisly.

As painful as it would be, his movie adaptation of Navy SEAL Marcus Luttrell‘s best-selling memoir would be an unflinching look at the tragic events surrounding the famous 2005 surveillance mission gone wrong in the mountains of Afghanistan.

For a movie that opens in New York City on Christmas Day, “Lone Survivor” features some of the most realistic military combat scenes ever filmed — including reenactments of the deaths of real-life Navy SEALs using their actual autopsy reports to get the details exactly right.

“The mantra that I heard from everyone more than anything else — all the family members, all the SEALS — was don’t sugarcoat it,” Berg recently told the News. “Get it right, be honest and truthful.

“Reading the book, studying the autopsy reports, studying the after-action reports from the military, I understood how violent that was,” he said, adding that he sought out the blessing of the families involved before he even started writing the script. “I saw videos of those clips, I know how hard they fell and how many bullets they received.”

The Navy gave the production unprecedented access to incident reports and retired and active SEALs served a tour of duty on the set, getting the actors in fighting shape and training them on live ammo. Berg’s marching orders were to make everything as realistic as possible for a movie that’s being compared to “Saving Private Ryan” and “Black Hawk Down.”

Starring Mark Wahlberg as Luttrell, the movie follows the events that unfolded on June 28, 2005, when a four-man Navy SEAL team went on a surveillance mission in a remote mountainous region in Afghanistan’s Kunar Province. Their mission, code-named Operation Red Wings, was compromised when three unarmed goat herders, including a young teen, stumbled on their location.

The SEALs — including team leader Michael Murphy (Taylor Kitsch), Matthew (Axe) Axelson (Ben Foster) and Danny Dietz (Emile Hirsch) — had a choice: kill them all to safeguard the mission or let them go and risk their position being discovered by the Taliban.

Their decision set forward a chain of events that culminated in the deaths of 19 American troops after a rocket-propelled grenade slammed into a U.S. Chinook helicopter during a rescue attempt.

A seriously injured Luttrell was the only one who made it down the mountain alive — saved by local Afghans who, motivated by their Pashtun code of honor, defied Taliban threats to their village to protect their guest.

Luttrell, who served as an on-set consultant to the film down to demonstrating for Wahlberg how he held his gun, didn’t flinch watching the movie.

But there was one scene that he did worry about watching: Axelson’s final moments before being shot dead by insurgents.

“That was the one scene I had to brace myself for because I wasn’t with him when he died,” says Luttrell, who was separated from Axelson by an explosion. “I was with Danny and I was with Mikey but I wasn’t with Axe. I wasn’t there when they filmed that scene. They made me leave the set.”

That scene was also especially tough for Berg, who had family members of many of the 19 fallen heroes attend a special private screening weeks before the movie’s release.

“That was where I cried, harder than I ever have before,” Berg said. “Cause I kept this movie in me for four-and-a-half years, and to be sitting right behind Mr. Axelson as he saw his son get shot in the face, it finally all came out. This really happened. These people died.”

As close as Berg got to recapturing the events that transpired on the ridges near Asadabad, there were some Hollywood nips and tucks.