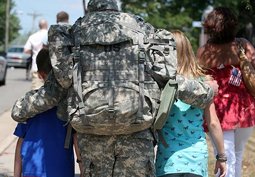 Companies like AT&T, 7-Eleven, Amazon, Capital One and Lowe’s are making a push to hire some of the young, unemployed 250,000 veterans who have served since 9/11.

Corporations are actively recruiting young veterans from infantry ranks and elsewhere for management or team-leading positions, according to a survey of Fortune 1000 companies to be published in G.I. Jobs Magazine.

Businesses say they value skills for operating within a chain of command and for handling mission-focused tasks, according to the survey done by Victory Media, which owns G.I. Jobs. Survey results, running in the magazine’s April issue and published online Wednesday, were provided to USA TODAY.

“It’s decision-making ability — that’s what you’re hiring somebody for. You trust their abilities to solve your problems for you,” says Dan Piontkowski, veterans staffing program manager for Hewlett-Packard.

He said combat veterans develop these skills. “They’re in situations where they have to make critical decisions with minimal information and a lot of distractions around them,” Piontkowski says. “And they have to make the right decision. And they do.”

The survey highlighted 20 top jobs for which corporations are hiring veterans, including managers for projects, operations, customer service, personnel, retail store and banking branches. The jobs pay, on a national average, $54,000 to $90,000 yearly.

Job searching has been tough for those who fought in the Iraq and Afghanistan wars. More than 250,000 veterans who served since 9/11 are without work today, according to estimates by the Bureau of Labor Statistics. The jobless rate for this generation in January was nearly 12% compared with 7.9% nationwide.

Meanwhile, more than 300,000 more of these veterans will leave the military each of the next four years as ranks are thinned.

The Victory Media survey of Fortune 1000 companies suggests many are actively beginning to recruit these veterans. Among them are AT&T, 7-Eleven, Amazon, Capital One and Lowe’s, according to the survey. Job recruiters who target veterans have been hired by many corporations such as HP, which created the veterans staffing position last May for Piontkowski, an ex-servicemember.

“These are the jobs that the companies have told us they are exclusively or significantly recruiting military veterans in 2013,” says Sean Collins, G.I. Jobs director.

In some categories — such as project manager or sales rep — executives say prior experience for the veteran is not always necessary, according to the magazine. For other management positions, at least a bachelor’s degree is recommended.

Corporations say they are also interested in hiring servicemembers with specialized military training as technicians, engineers, information technology specialists and drivers, as well as in machinery maintenance and security.

Victory Media surveyed Fortune 1000 companies and based the results on 576 responses, Collins says.