V-J Day in Times Square: Story Behind the Picture 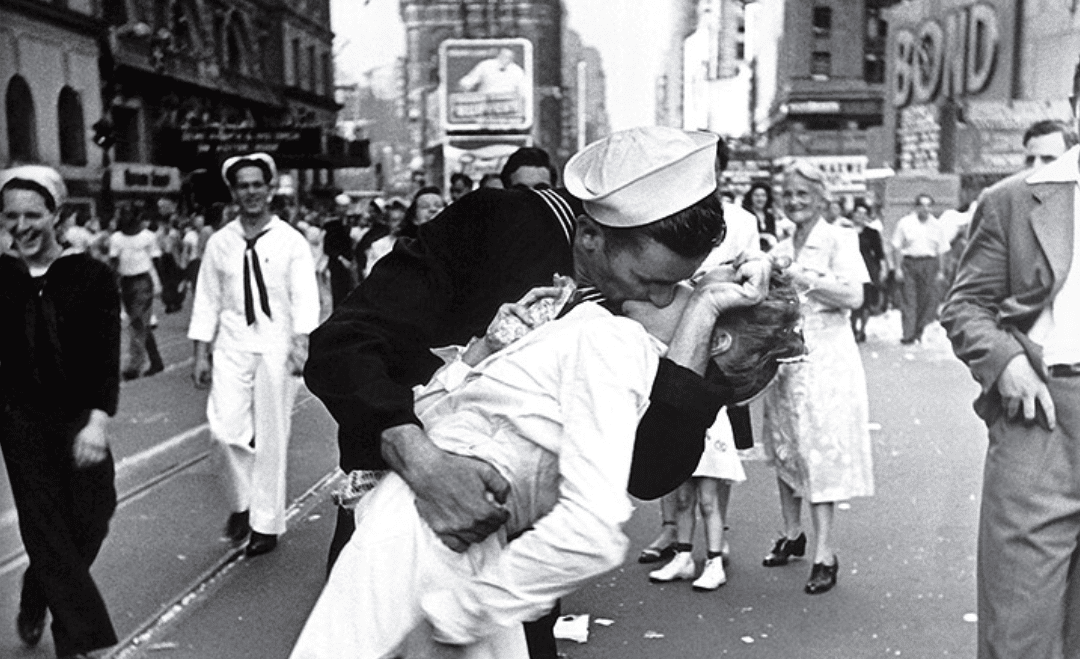 On August 14, 1945, Alfred Eisenstaedt took a picture of a sailor kissing a nurse in Times Square, minutes after news broke that Japan surrendered to the United States. Two weeks later, LIFE magazine published that image and it instantly became one of the most famous WWII photographs in history.

For many, this photograph speaks to a momentous moment in American history and captured what it felt like for the war to finally be over. For the photographer Eisenstaedt, it was a once in a lifetime opportunity that came and went in only a few seconds.

In Times Square on V.J. Day I saw a sailor running along the street grabbing any and every girl in sight. Whether she was a grandmother, stout, thin, old, didn’t make a difference. I was running ahead of him with my Leica looking back over my shoulder but none of the pictures that were possible pleased me. Then suddenly, in a flash, I saw something white being grabbed. I turned around and clicked the moment the sailor kissed the nurse. If she had been dressed in a dark dress I would never have taken the picture. If the sailor had worn a white uniform, the same. I took exactly four pictures. It was done within a few seconds. Only one is right, on account of the balance. In the others the emphasis is wrong — the sailor on the left side is either too small or too tall. People tell me that when I am in heaven they will remember this picture.

The People in the Photo

Both faces in the photo were hidden, so when the public called for the identity of the couple, multiple women and men stepped up claiming to be the people in the photo. In fact, for thirty years, Edith Shain was accepted to be the nurse in the photo all the way up until the release of the 2012 book by Lawrence Verria and George Galdorisi titled, “The Kissing Sailor.”

With this book, Verria and Galdorisi solved the 67-year-old mystery by providing irrefutable proof and identifying the couple in Eisenstaedt’s photo as Navy Quartermaster 1st Class George Mendonsa and Greta Zimmer Friedman, a dental nurse from Austria who immigrated to the USA in 1939.

It was also later found that Mendonsa’s girlfriend at the time, Rita Petry, can be seen just over his right shoulder in the photograph. They married one year later, and according to Petry, the kiss never bothered her.

The Story Behind the Picture

“The Kissing Sailor” not only exposed the subjects within the photo, but also shed light on the story behind the celebrated picture, one that happens to be quite controversial.

After reporting to work at a dentist’s office nearby, 21-year-old Greta Friedman stepped outside to see why people were celebrating in Times Square, and suddenly found herself in a strong embrace with a stranger, 22-year-old George Mendonsa, who had been out drinking with his date, Rita, at Child’s Bar.

Friedman later said in an interview, “I felt he was very strong, he was just holding me tight, and I’m not sure I — about the kiss because, you know, it was just somebody really celebrating. But it wasn’t a romantic event. It was just an event of thank God the war is over kind of thing.” She added, “It wasn’t my choice to be kissed. The guy just came over and kissed or grabbed me.”

Mr. Mendonsa often described the kiss as an out-of-character moment, a visceral reaction to the flash of a white nurse’s uniform which reminded him of his days as helmsman of the Sullivans, when he would watch nurses take care of the wounded. He said in an interview, “It was the uniform she had. If that girl did not have a nurse’s uniform on, I honestly believe that I never would have grabbed her.”

As soon as the kiss was over, they went their separate ways and neither knew of the picture until years later.

Where Are They Now?

The dental assistant in the photo, Greta Zimmer Friedman, went on to work in toy design and doll clothing in the 1940s and 1950s, and in 1956, she married Dr. Mischa Friedman, a WWII veteran of the U.S. Army Air Corps and moved to Maryland where she attended Hood College. There, she studied oil painting, printing, sculpture, and watercolors; graduating in 1981 alongside her two children, Mara and Joshua. She died in 2016 at the age of 92 and was laid to rest next to her husband at Arlington National Cemetery.

George Mendonsa, the Navy sailor in the photo, went on to become a commercial fisherman, like his father, and worked until he was 82. He died in 2019 after complications from a fall at an assisted living facility in Rhode Island, just two days short of his 96th birthday. He and his wife, Rita Mendonsa, were married for more than 70 years and had two children, Ronald Mendonsa and Sharon Molleur.

The German-born American photographer and photojournalist, Alfred Eisenstaedt, went on to have more than 90 of his pictures featured on the cover of Life Magazine; and more than 2,500 of his photo stories published, making him one of the most important and most active photojournalists of the 20th century. “The photographer’s job,” he once wrote, is “to find and catch the storytelling moment,” and time and again he succeeded. He resided in Queens, New York, for the remainder of his life and died in his bed in 1995 at the age of 96 in the company of his sister-in-law, Lucille Kaye and friend, William Marks. His most famous work remains the iconic VJ Day in Times Square (1945).