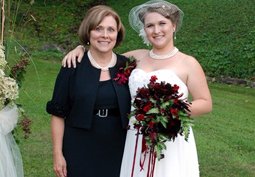 Push-up palace Victoria’s Secret may be pushing a new line of “survivor bras” if Allana Maiden has her way.

“I started the petition because I wanted to give something back to my mom and to other breast cancer survivors,” says the 27-year-old from Richmond, Virginia. “My mom had a single mastectomy when I was just 6 years old and since then I’ve seen her struggle with finding mastectomy bras that fit properly, that are flattering and that look nice. She lives in a rural area and has to drive an hour and a half to get to a specialty store that carries them.”

Maiden says she chose Victoria’s Secret because of the chain’s ubiquity and reputation.

“They are everywhere,” she says. “When you think of bras, you think of Victoria’s Secret. And they already have women there who will measure you and find a proper-fitting bra. They have all the resources there already. The next step would be to design a bra and put them into the stores.”

Maiden envisions a line of “pocketed” bras (the pockets hold prosthetic breasts) for survivors who haven’t had breast reconstruction, but her vision doesn’t stop there.

“They could also create undershirts for women who don’t want to wear prostheses,” she says. “They could be implemented into a survival line for women who’d had mastectomies.”

What choices do breast cancer survivors have now?

Many boutiques exist online including NearlyYou, Woman’s Personal Health Resource, and About the Girl.

“Nordstrom is great,” she says. “They have certified mastectomy fitters on staff and they carry anything from surgical camisoles to pre-pocketed bras to pocketed bathing suits.”

Women can purchase “regular” bras and have them pocketed there or even bring in their old bras for tailoring.

“That way they don’t lose their sense of identity,” says Jenison. “And they don’t have to wear some huge honking industrial bra that looks like something their grandmother wore. We have younger women who are fighting this. They’re not going to want to wear something that covers them from the neck to their rib cage.”

But Maiden says existing options are still too limited for ordinary survivors.

“In large cities, there may be more options, but for people like my mom who live out in the country where the closest mall is 40 minutes away, they might not have those options,” she says. “And when you order online, you never know if it’s going to fit.”

While Change.org says support for this petition has grown “faster than most,” not everyone is thrilled about the idea of Victoria’s Secret getting into the breast cancer business.

“There’s no way I’m going to walk into a Victoria’s Secret where some perky 21-year-old is working, flash her my scarred chest and say ‘help me find a bra’,” says Brandie Langer, a 33-year-old breast cancer survivor from Chicago. “I don’t think they could do it in a good way. It would be boiled down to sex, sex, sex. I can see ads with scantily clad girls in quote, unquote, survivor bras. They would never put a real survivor in their commercials because our breasts aren’t marketable any more.”

Maiden says she, too, was concerned about the company’s “boob-centric” brand, but felt they were still the best choice.

“I know they’ve come under scrutiny because a lot of people think they’re furthering unattainable ideals for what women should look like,” she says. “But when it came down to deciding who to approach, I felt that all the pieces were there.”

Victoria’s Secret did not immediately return a request for comment. However, the company does seem interested in at least talking about Maiden’s proposal.

“I spoke with their vice president of external communications today,” Maiden says. “She asked why I chose Victoria’s Secret, what I expected from the line if they were to create it. She said she was going to take my ideas to the right people inside the company and let me know what they said.”