Veterans Bring Leadership to the Classroom 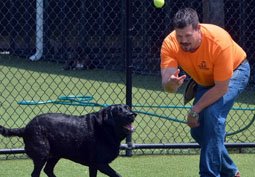 WASHINGTON — One trained soldiers to use Stinger missiles to shoot down enemy jets and helicopters.

Another sailed silently beneath the seas in a submarine during the Cold War.

All three are now transferring their wartime skills to classrooms as teachers.

Along with thousands of other former members of the military, they’re part of an effort to bolster America’s teaching corps with worldly veterans whose leadership skills and life experiences could be valuable in the classroom.

Troops to Teachers, a nearly 20-year-old Pentagon program, has produced more than 15,000 teachers, largely for high-need schools. The program gives guidance about state teaching requirements and how to make the transition to teaching.

“A lot of times kids want to test me because I was in the military,” said Anthony Kajencki, a West Point graduate and former air defense artillery officer who teaches at Northern High School in Durham, N.C. “ ‘Look at this guy. Let’s see how tough he is. Let’s see if I can push him.’ ”

Kajencki, who’s 41 and is known to his students as “Capt. K,” said one reason he chose to become a high school math teacher was a commitment he made after West Point to a lifetime of service. The military taught him about teamwork.

“I learned about how to be resilient and how to just take whatever West Point gave me and withstand it and continue on,” he said. “We were constantly tested.”

It’s what he strives to pass on to his students; that and what it’s like to jump out of a plane.

“Our people come with a background,” said Ed Kringer, the director of the Voluntary Education Program, of which Troops to Teachers is part, at the Department of Defense. “They’re disciplined. They have leadership skills. They have a lot to offer that can transfer into the classroom.”

Congress has authorized about $8.5 million per year for one-time $10,000 bonuses for people in the program who agree to work in schools that primarily serve low-income, high-needs students.

Kajencki spent more than seven years in the Army, including stints at Fort Bragg in North Carolina and Fort Drum in New York, training soldiers to use missiles to take down enemy aircraft. He also was a protocol officer in Bosnia for a commanding general.

He left the military in 2001 to become a teacher, but initially he ended up working in large stores instead. In 2009 he looked into the Troops to Teachers program. He also won a fellowship from Duke University in Durham to earn a master of arts degree in education. In return, he agreed to teach at a high-poverty school.

“I feel I have the ability to help people succeed,” Kajencki said. “I did that in the Army. I did it in retail. Now I’m doing it in education. That’s something that has given me a lot of joy.”

Particularly satisfying has been helping students conquer their math phobias, struggle with algebra and pass.

“Algebra is one of the first classes where they have to demonstrate critical thinking,” Kajencki said. “It’s really tough. It’s abstract. It takes a lot of fortitude to make it through.”

Kajencki, who’s spending the summer working for a Charlotte kennel until school resumes, knows his new career won’t make him rich. He earns $37,000 a year in a state where teacher salaries are among the lowest in the nation.

The all-boys class of fifth-graders in North Charleston, S.C., where John Helton, a 50-year-old retired Coast Guard commander, teaches loves to hear stories from his three-decade career: tales of rough seas, rescues at sea and Cold War-era submarines deep under the sea.

“That’s how you get the buy-in,” Helton said. “Kids nowadays don’t want to hear a talking head. They want to hear someone who is excited about it and has something to say and really cares about them.”

A native of Chicago, Helton enlisted in the Navy and served for more than 10 years on submarines. Then he spent 20 years as a Coast Guard engineer, a career that took him to ports from Maine to the Midwest, as well as Puerto Rico, where he was a military liaison for the State Department and the military’s Southern Command.

At the end of his military career, he was the commanding officer of the naval engineering support unit that repaired ships.

“Pretty much everything I teach I have a story,” Helton said.

Helton has a degree in vocational education, but he wanted to teach in an elementary school. He went through Troops to Teachers and Teach for America, an organization that recruits college graduates and professionals to teach in low-income schools. He has an interim teaching certificate and will become fully certified in two years.

In his first year at North Charleston Elementary School last year, Helton often worked 12-hour days and spent several more hours in the evening to prepare for the next day. Like many of his students, he grew up without a father around most of the time. He lived on welfare and didn’t have a mentor, which is why he got involved in Troops to Teachers after he retired from the Coast Guard in 2011.

“If we can get a hold of the kids when they’re young and make a difference in their lives and spark a desire to learn,” he said, “then we’ll have them for life.”

Brandon Phillips’ military career is also something he talks about occasionally in his fourth-grade class, especially when students are curious. He said he kept it light and nonspecific.

Phillips, 40, was the Black Hawk flight leader with Army Special Operations on missions in Iraq and Afghanistan, so he had to plan with his team, manage the work and keep everybody doing what was necessary to complete the mission.

In some ways, his classroom is no different

“There’s always multiple things going on,” Phillips said. “Different people have different needs. My brain is just wired to be able to respond to that without getting too stressed out.”

He enlisted in the Army in 1991 after a year of college and retired as a chief warrant officer. In his 20-year Army career, he went to flight school, earned a degree in aeronautics from Embry-Riddle Aeronautical University and lived in many parts of the world.

Phillips was deployed in Afghanistan or Iraq every year from 2003 through 2010. He began work toward a master’s degree in education online before he retired from the Army. Troops to Teachers provided financial support as he made the transition.

“I think what initially made me start to gravitate toward teaching and volunteering with kids started with my own kids and trying to help them with their homework,” Phillips said. “I was never a really good student, and so I started talking to my kids, especially my older son, and teaching him the way I wished someone had talked to me.”