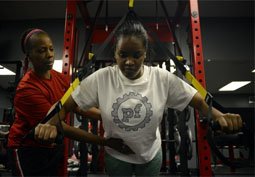 After a 23-year career in the U.S. Army, Valetta SuRae Stewart was concerned that the primary skills she could bring to the private sector were “breaking things and killing people.”

Neither promised the kind of career Stewart, 51, wanted for the rest of her life. And upon reflection, she realized that her fears weren’t really true.

As a young drill sergeant at Fort Dix, N.J., she had stripped 60 pounds off recruits who joined the Army woefully out of shape. Later, she helped train other soldiers who needed help maintaining their fitness to meet the Army’s standards. Along the way, she learned the art of helping people attain goals they believed were impossibly out of reach.

Now, at an age when many people are beginning to glimpse retirement on the horizon, the District Heights resident is studying to become a personal trainer, one of hundreds of thousands of military personnel making the sometimes difficult transition to civilian employment. In her case, however, there is a market hungry for new workers and a critical need for anyone who wants to help address the U.S. obesity problem.

“When I was a drill sergeant, I had to be more fit than my soldiers,” she said. “I had to prove myself almost every cycle. Every class that I trained, I had to run faster, work harder and get better performance out of my soldiers.”

Stewart enrolled in programs sponsored by two major organizations that prepare people to become physical trainers, in gyms or on their own. Through the American Council on Exercise’s six-month-old Salute You program for veterans, she received a $700 scholarship and was certified as a trainer in November. Using G.I. Bill benefits, she studied at the National Personal Training Institute and is serving as an unpaid apprentice at Atlas Fitness in Southeast Washington, part of becoming certified by the National Academy of Sports Medicine.

The Salute You program, which in six months has handed out 226 scholarships and certified nine trainers, guarantees course graduates interviews at major fitness chains such as Anytime Fitness and 24-Hour Fitness, according to Scott Goudeseune, the ACE’s president and chief executive. Gym trainers can earn about $50,000 a year, Goudeseune said, and more entrepreneurial trainers who strike out on their own can bring in six-figure salaries.

With so many programs, government and private, trying to help about 800,000 veterans move into new jobs and careers, no one really knows how effective they are, said James Schmeling, who studies the issue for the Institute for Veterans and Military Families at Syracuse University.

The best of them, he said, are careful to match training programs with employers’ needs in particular geographic areas, because vets tend to settle down near their last duty stations or go back home, he said. But those are not necessarily where the jobs are, and employers in those locations might not need their skills, he said.

What’s clear from unemployment data is that younger, post-Sept. 11 veterans of the wars in Afghanistan and Iraq are having more trouble finding work than their older counterparts, Schmeling said. That makes sense, because older vets have been in the labor market longer, while younger ones have been leaving the military only in recent years and are looking for work or new skills. But even among post-Sept. 11 vets of all ages, the youngest, ages 20 to 29, have the highest unemployment rates, according to a monthly report from Schmeling’s institute.

According to the institute, 20- to 24-year-old vets faced a 14.5 percent unemployment rate in December and 10.4 percent of 25- to 29-year-old vets were unemployed. The overall rate for veterans was 5.5 percent, below the level for all U.S. workers (6.7 percent).

Stewart, a divorced mother of two grown sons, is confident she will be able to provide a service that few other trainers can offer. She plans to become a one-stop wellness adviser for her clients. She has studied massage therapy and raw cooking, she said, and estimates that 90 percent of her own diet is made up of raw food, much of it juiced. She currently supports herself by offering classes and demonstrations on raw food diet and preparation. Her 10- and 13-year stints in the military were separated by years when she worked cutting hair and held other jobs that gave her an earful about people’s physical condition.

“You learn very, very intimate things about people,” she said. “And everybody was broken. This one had heart disease; this one’s mother had just died from cancer, this one had high blood pressure. . . . That’s what sent me to nutrition.”

Now, Stewart said, she hopes to address the constellation of bad habits that contribute to poor health.

Stewart has one private client, a young woman from the District who is studying at the Berklee School of Music in Boston and performing “livetronica” drumming and singing in local clubs. Glorious Allen hired Stewart while she was home on break this month because she needed more stamina to perform her physically demanding sets, and because she wanted to tone her body.

Stewart worked with Allen six days a week for an hour at a time. In three weeks, Allen lost 15 pounds and switched to a mostly raw diet, she said. When she started, she couldn’t do push-ups, even on her knees. Now she does half a dozen in the traditional position on her hands and toes. Her skin has cleared up dramatically, she said.

If it all works out, Stewart wants to make that kind of effort her life’s work. Her past and her future, she said, are “very similar. You have to motivate them. You have to give them little successes.

“Tact,” she added, “is being able to tell someone to go to hell and have them looking forward to the trip.”