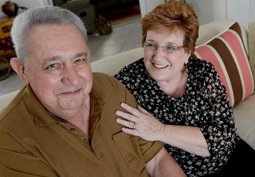 SARASOTA – He was expecting the worst, but that did not help when he got it.

The letter came in the mail a week ago, informing Tom Gervasi, 76, he will get no compensation from the U.S. Department of Veterans Affairs for the male breast cancer that is killing him.

He needs proof the rare cancer was caused by contaminated groundwater he drank while stationed as a Marine at Camp Lejeune in 1956, the letter said.

Problem is, the federal agency charged with completing the tests to prove the link between the water and a high number of cancers among those who lived at the camp has not finished analyzing the area where he lived.

Gervasi’s fight to get the government to acknowledge the link between cancer and contaminated groundwater at the North Carolina base was recounted in the Sarasota Herald-Tribune Nov. 25. The following Friday, he and six other men with cancer who lived at Camp LeJeune were interviewed in St. Petersburg by NBC’s Brian Williams for a report to air sometime in January.

One of the men told Gervasi his claim has been denied six times.

It’s not as if the VA does not know that groundwater was contaminated for decades at the camp.

A bill signed in August, the Honoring America’s Veterans and Caring for Camp Lejeune Families Act, provides medical care for ex-Marines and their families stationed at the base.

The VA’s denial of Gervasi’s claim is appalling, says Mike Partain, a man born at Camp Lejeune who later developed male breast cancer. He has become an advocate for male breast cancer victims from LeJeune and their families.

Partain said he knows of five men with breast cancer who have been awarded full VA benefits because of their exposure to the water. He shares Gervasi’s conclusion that the Marine Corps hopes older people who were exposed will simply die, rendering the issue of culpability moot.

“This is nothing more than another example of how the bureaucracy keeps delaying any meaningful resolution in what is becoming a blatant attempt to minimize their liability through attrition of the Marines and families poisoned at Camp Lejeune,” Partain said.

Capt. Kendra Motz, Marine Corps spokeswoman for Camp Lejeune issues, said the Corps has attempted to publicize efforts to identify problems in the groundwater and to help recruit people for health studies.

“Our outreach efforts began in 1984 following the discovery of chemicals in the drinking water wells,” she said Thursday.

Standard practices for industrial activities, waste management and disposal were much different before that time, she said. The wells were closed in 1985.

While the Marine Corp acknowledges the water contained toxic chemicals, the link to cancers has not been proven, officials say.

“At this time, we do not know if past exposure to the chemicals in Camp Lejeune’s drinking water caused adverse health effects in individuals,” said Motz.

She said a drinking water notification database has been established, and about 175,000 people have registered.

In a 2012 booklet of questions and answers distributed by the Marines Corps and the U.S. Navy, Marine Commandant Gen. James Amos writes that he hopes for a “responsible resolution to this challenging and complex situation.”

“Some of our Marine family members have experienced tragic health issues they believe are associated with water they drank or used in the past at Camp LeJeune. My heart goes out to these individuals,” Amos said.

Partain said the denial of benefits for Tom Gervasi demonstrates a disconnect between what officials say and what they do.

“So much for the government’s token statements about their concern for the health, safety and welfare of their Marine family,” Partain said.

According to government documents, the Hadnot Point area of the camp, where Gervasi lived, is suspected of being the most contaminated of all sections of the sprawling base.

The federal Agency for Toxic Substances and Disease Registry, a division of the U.S. Department of Health and Human Services, is charged by Congress with studying the contamination. Its earlier results confirming chemical-laced groundwater helped verify some veterans’ claims and set the stage for the new law.

But an investigation of water used in the barracks in the Hadnot area, thought to be contaminated with chemicals from leaking fuel storage tanks, has not been completed.

Those results have been promised for almost four years. The report, which was supposed to be ready last month, has been pushed back to spring of 2013.

Last week, a spokeswoman for the agency said she would attempt to find someone who could answer questions about the study, but so far no response has been received.

In 2010, the ATSDR criticized the Marine Corps for withholding documents it needed to complete its studies.

Its director wrote to the deputy assistant secretary of the Navy and the deputy commandant of the Marines stating unequivocally that the water was contaminated.

Advocates have long criticized the Corps for denying the contamination despite being repeatedly warned of it by chemists.

Gervasi has become an advocate by circumstance and love for his wife.

He knows he does not have long to live. Even crossing from his office to the living room in his Sarasota home leaves him short of breath. Breast cancer cells have invaded his lungs and bones.

He never imagined his final days would be filled with paperwork and rage.

So far, he and his wife have asked his oncologist not to tell them how long he has.

In addition to feeling weak and tired, he has to deal with emotions that range from anger to depression to — he still cannot help it — hope.

“I may be dead in the water,” said the former police officer. “I probably won’t see anything from this myself. But if I can get this done for Elaine, I will keep fighting.”