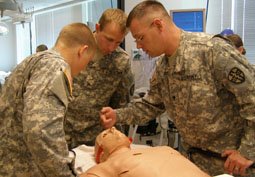 The Army is developing a roadmap for incorporating mental resilience into training devices, basing the decision on the theory that stressing a soldier during training — and teaching him or her techniques to manage that stress — is the best way to prevent military suicides and PTSD.

The goal isn’t focused on just the technology, but rather where in the training cycle these devices should be employed, said Brian Kemper, associate chief systems engineer for live training at the Army’s Program Executive Office for Simulation, Training and Instrumentation.

In April, PEO STRI put out a request for information for the TADSS (training aids, devices, simulators and simulations) Squad Overmatch project to see what solutions industry can offer. It’s part of a response to the 2012 Army Strategic Planning Guidance, which includes a focus on making infantry squads more potent than their hostile counterparts – thus the “overmatch.”

Part of this will involve the military’s growing emphasis on mental resilience and adaptability to new challenges. In addition to creating more capable warriors on the battlefield, this should also reduce vulnerability to PTSD and suicide.

There were 56 proposals to an Army senior advisory board, and the STRI study came in first, according to Kemper. “I think the reason was that it focused on identifying opportunities that are potentially there on the front end in our pre-deployment training, which will hopefully make a difference in discouraging PTSD and suicide on the back end.”

There are three aspects to STRI’s work. First, identify technologies that can be used to create or modify training devices to stress trainees in a way that will prepare them for battle. As examples, the STRI solicitation cites simulated fires, explosions, the smell of rotting garbage, touching dead bodies, and interacting with squadmates and civilians.

Second, determine when during training to inject these devices and stresses.

“They have to be layered,” Kemper said. “You can’t throw these types of extreme stressors at a trainee all at once.”

Third, devise metrics to determine which technologies meet these requirements.

“How do we map what are the required mental, resilience, or even situational awareness skills that we could match with these technologies?” Kemper asked.

Kemper points to Army combat medic training as an example of solid training for stressful situations, including working in hospital emergency rooms and practicing on lifelike mannequins.

“The first time they are in a deployed situation and they are exposed to the horrors of war, they are able to keep their composure and perform their mission. We should be able to do similar things as we get smarter in our training continuum with mental and resilience skills training,” he said.

Kemper categorizes this as a “human performance” project, one that could have a major effect on future Army technology.

“As we go back and inform Army leadership of what we found, we will probably propose or help influence where the Army is investing in technological maturation. The idea is to have some sort of technology insertion and integration roadmap based on these recommendations.”