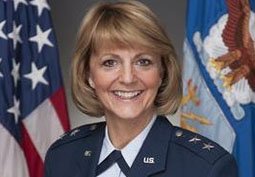 The Air Force on Friday announced that it had named a woman to head its troubled Sexual Assault Prevention program, herself a much higher rank than the former director who was himself arrested on charges of sexual assault.

Maj. Gen. Margaret H. Woodward was named the new director of the Sexual Assault Prevention and Response Office within the Air Force on Friday afternoon, where she will implement the Pentagon’s programs to lower the vastly troubling rate of assaults in the military. According to her official biograpahy, Woodward has served in the Air Force since 1983, working her way up in various command roles. In 2007, she was named the commander of the 89th Airlift Wing, which includes responsibility for the President’s Air Force One.

In 2010, she became the commander of the Seventeenth Air Force, which is the aerial portion of U.S. Africa Command, based in Germany. In that role, she was operationally in command during the 2011 bombing campaign, part of the NATO intervention in Libya which led to the ouster of dictator Moamar Qaddafi. That made her the first woman in the history of the U.S. military to serve as the commander of an air campaign. Prior to her new job, Woodward was serving as the USAF’s Chief of Safety, where she “develops, executes and evaluates all Air Force aviation, ground, weapons, space and system mishap prevention, and nuclear surety programs to preserve combat readiness.”

Woodward’s new position is open due the fact that the previous holder, Lt. Col. Jeff Krusinski, was removed from duty after allegedly assaulting a woman in an Arlington, VA strip club’s parking lot. The Air Force was also the home to another high profile scandal, where Lackland Air Force Base instructors assaulted dozens of cadets, leading to one conviction so far. In response to those and other systemic issues, Secretary of Defense Chuck Hagel ordered a complete overhaul of the current program, including mandatory retraining for all soldiers and officers currently serving in sexual assault prevention roles.