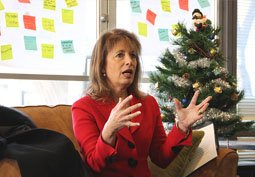 Rep. Jackie Speier, a Democrat from California’s 14th district, discussed ways to ease the transition for former service members into civilian life during a meeting with UC Berkeley student-veterans Monday.

Speier, whose district includes localities such as South San Francisco and San Mateo, spoke to about 30 people in a question-and-answer event sponsored by the Cal Veterans Group. The event, located in the Cesar Chavez Center, was centered on ways to reintegrate student-veterans into campus life, according to UC Berkeley senior and the organization’s Vice President Mike Drake.

“Once you leave the military, you’re on your own,” Drake said before the event. “Less than 20 percent of veterans are utilizing all the benefits available to them. Hopefully, this event will show vets that the situation is improving, that Congress is getting things done.”

Speier opened the discussion by highlighting some ways in which her work has helped veterans. Such efforts include her collaboration with Rep. Barbara Lee, D-Oakland, to increase access to medical resources and answer requests for benefits at the regional veteran affairs office in Oakland.

“In my opinion, if you come back from war with a disability, we should cover it, and that’s it,” Speier said. “We’re fast to go to war, to place men and women in the front lines, but then we don’t do so well when they come back.”

Speier also heard suggestions from the audience to improve accessibility to higher education for veterans, such as extending military tuition assistance from four to five years and offering more advising opportunities for those looking to transfer from community colleges to universities.

“Ours is a good story, and I want it to be known,” said UC Berkeley senior Tiffany McKinley, a U.S. Navy veteran. “But there needs to be support for us (in higher education) as well.”

In response to concerns from the students about job prospects after graduation, Speier said her office is working to help veterans translate their skills developed in the military to civilian life as well as link them with companies sympathetic to their experience.

Richard Steffen, an employee in Speier’s office and a veteran of the Vietnam War, said one way to do this is to connect student-veterans with employers who have former military experience.

Speier said creating a positive image of veterans in the minds of employers and the public is also key to their success.

“If the public perception is that veterans are associated with suicide, mental health problems — that’s not good,” she said. “They have to see you all at Cal, see that’s it not all that bad. You have a great story to tell.”