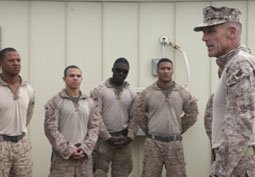 PENTAGON — Among the U.S. government agencies hardest hit by the shutdown is the Department of Defense, though officials say military operations around the world are not affected.

Roughly half of the 800,000 civilian workers the U.S. Defense Department employs are being furloughed. They are largely administrative employees – working behind the scenes to ensure that soldiers are supplied and paid.

“Those of you in uniform will remain on your normal duty status. The threats to our national security have not changed and we need you to be ready for any contingency. Ongoing military operations, like our efforts in Afghanistan, will continue,” said Obama.

The president offered assurances the Pentagon’s activities will be funded as usual, and soldiers will get their pay.

“If you are serving in harm’s way, we are going to make sure you have what you need to succeed in your missions. Congress has passed, and I’m signing into law, legislation to make sure you get your paychecks on time, and we will continue working to address any impact this shutdown has on you and your families,” said Obama.

Although the Defense Department has no plans to ground any airplanes or call home any troops or vessels that are part of core missions, there are concerns about a lasting impact that the budget impasse will have on the U.S. military.

Defense Secretary Chuck Hagel, traveling in Asia, told reporters that allies and partners are questioning whether the United States is able to meet its commitments in the region. “I have been asked about why during my visit here to South Korea. It does have an effect on our relationships around the world and it cuts straight through the obvious question: Can you rely on the United States as a reliable partner to fulfill its commitments?”

Hagel said the U.S. military is living in what he called a dark cloud of uncertainty and not knowing what is going to happen.

The Pentagon furloughs come on top of those already implemented in the past few months, when thousands of employees were forced to take time off due to automatic budget cuts that kicked in as a result of the failure by the White House and Congress to reach a budget deal.

Defense Department officials say that although core missions are being carried out, both uniformed and civilian personnel who are on training exercises and other projects the Pentagon does not consider essential are being returned home as a result of the shutdown.