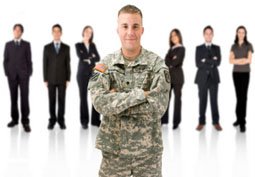 By: Zachary A. Goldfarb

The White House announced a significant new effort Tuesday to reduce unemployment and improve job prospects among veterans, enlisting the support of U.S. companies to hire 435,000 veterans and military spouses over the next five years.

Retail giant Wal-Mart, the Blackstone private-equity firm and shipper UPS are among the major American brands that are committing to hiring hundreds of thousands of veterans and spouses, officials said. Wal-Mart previously announced that it would find a job for any veteran discharged honorably in the year he or she leaves the service.

About 1 million new veterans are expected to enter the labor force in the coming years with the end of the war in Iraq and the ongoing withdrawal from Afghanistan. But many veterans are having a tough time finding jobs.

There are 207,000 unemployed veterans from the wars in Iraq and Afghanistan, according to the Bureau of Labor Statistics. Hundreds of thousands more are not looking for work because of injuries or other reasons but could enter the labor market over time.

“When they hit the job market, employers don’t always recognize the high-quality, high-tech skills our newest veterans have gained in the military. They don’t understand the leadership that they’ve shown under extraordinary circumstances,” President Obama said Tuesday. “So, too often, just when these men and women are looking to move forward in the next chapter of their lives, they’re stuck in neutral, scraping together odd jobs just to pay the bills.”

The White House announcement — coordinated by the offices of first lady Michelle Obama and Jill Biden, the wife of Vice President Biden — is part of the administration’s “Wounded Warriors” program. The jobs program began in August 2011 and has resulted in the hiring of 290,000 veterans or military spouses, the administration says.

One of the biggest challenges in the program is making it easy for veterans to capi­tal­ize on the skills they have gained in combat when they return to the private sector, according to program officials.

“What’s really been challenging is we’re dealing with folks who have done jobs under the most difficult conditions,” said Tina Tchen, Michelle Obama’s chief of staff. They drive “a truck to deliver supplies in a war zone, but they can’t get the licensing they need to drive a truck down I-95.”

Another example, she said, are spouses who may be experienced nurses or paramedics but lose their license to practice when they move from state to state, as they often do.

Tchen said the administration was working with companies to address the problems, including retraining veterans.

In remarks Tuesday, the first lady said the program was designed to achieve more than the economic goal of keeping unemployment low among veterans.

“These efforts are about so much more than a paycheck. This is about giving these men and women a source of identity and purpose,” she said. “It’s about providing thousands of families with financial security, and giving our veterans and military spouses the confidence that they can provide a better future for their children.”