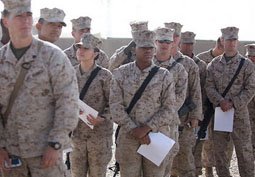 By: Donna Cassata and Richard Lardner

WASHINGTON — Angered by the epidemic of sexual assault in the military, the House on Thursday endorsed a mandatory minimum sentence of two years in prison for a member of the armed services convicted of rape or sexual assault in a military court.

By voice vote, the House approved the additional punishment as part of a series of steps lawmakers have taken to tackle the growing problem of sexual assault. The provisions are contained in a sweeping defense policy bill for the 2014 fiscal year beginning Oct. 1.

“Being in a military uniform should not be a get out of jail card,” Rep. Mike Turner, R-Ohio, said as the House began work on more than 170 amendments to the defense bill.

Lawmakers hope to complete the measure on Friday but must reconcile it with a Senate version.

Congress is determined to shake up the military’s culture and give victims of sexual assault the confidence that if they report a crime their allegations won’t be dismissed or they won’t face retaliation.

The chairman of the Senate Armed Services Committee, Sen. Carl Levin, D-Mich., said Thursday the panel had approved its 2014 defense policy bill and it included a provision requiring an automatic review by an individual higher in the chain of command should a commander decide not to prosecute an allegation of sexual assault. The committee’s bill also would make it a crime to retaliate against victims who report a sexual assault, and would strip commanders of the authority to dismiss court-martial convictions.

Levin called the automatic review provision “a very significant protection and assurance of the seriousness with which allegations are going to be taken, and not simply swept under the rug by a lawyer or by anybody.”

Last week, the House Armed Services Committee approved provisions in the defense bill which included stripping military commanders of the power to overturn convictions in rape and sexual assault cases. The panel also voted to require that anyone found guilty of a sex-related crime receive a punishment that includes, at a minimum, a dismissal from military service or a dishonorable discharge.

Turner and other lawmakers argued on Thursday that they needed to add a minimum sentence to that punishment.

Several Democratic women opposed the step, arguing that while confinement was appropriate, Congress should wait for a Defense Department report on sentencing guidelines.

Rep. Niki Tsongas, D-Mass., who worked with Turner in crafting several of the provisions, broke with her colleague on the amendment, saying it was premature until the Pentagon report.

The Pentagon estimated recently that as many as 26,000 military members may have been sexually assaulted last year, up from an estimated 19,000 assaults in 2011, based on an anonymous survey of military personnel. While the number of sexual assaults that members of the military actually reported rose 6 percent to 3,374 in 2012, thousands of victims were still unwilling to come forward despite new oversight and assistance programs aimed at curbing the crimes, the report said.

Reflecting the nation’s war-weariness, the House overwhelmingly backed an amendment supporting President Barack Obama’s plans for withdrawing U.S. troops from Afghanistan by the end of 2014 while urging the administration to speed up the timetable if possible. The amendment also includes non-binding language that recommends Congress vote to authorize the presence of any U.S. troops in Afghanistan beyond 2014.

“We should not allow another American to die in Afghanistan unless we vote on the policy,” said Rep. Walter Jones, R-N.C., one of co-sponsors of the amendment. “The American people want our troops out.”

The U.S. has trained hundreds of thousands of Afghan security forces and it is time to turn over the responsibility of defending the country to the Afghan government, said Rep. Adam Smith, D-Wash., another of the amendment’s co-sponsors.

“It will always be a challenging part of the world, in both Afghanistan and Pakistan. Violent extremists are abundant in both places, and we’ll have to keep an eye on it,” said Smith, the top Democrat on the House Armed Services Committee. “But we do not need to have the troop levels that we have now.”

The defense bill would provide the military with $638 billion for 2014, including $86 billion for the war in Afghanistan. The Obama administration has threatened a veto of the legislation, objecting to provisions that would limit the president’s authority in handling terror suspects at the U.S. detention facility at Guantanamo Bay, Cuba, and implementing a nuclear reduction treaty.

Despite the congressional clamor to cut the budget deficit, the bill rejects several Pentagon attempts to save money. It spares a version of the Global Hawk unmanned aircraft, rebuffs attempts to increase health care fees for retirees and their dependents, and opposes another round of domestic base closures.

Overall, the bill fails to acknowledge the automatic, across-the-board spending cuts that Washington has grudgingly accepted. The cuts of $41 billion hit the Pentagon on March 1 and forced the military to furlough workers and scale back training.

The Pentagon faces deeper reductions in projected spending of close to $1 trillion over a decade, but the bill did not reflect that reality for next fiscal year. The Pentagon likely will have to cut $54 billion to meet the numbers dictated by the so-called sequester.

Levin, the chairman of the Senate Armed Services Committee, said the defense policy bill approved by the panel Thursday authorizes $625 billion in spending for 2014. The legislation approves a one percent pay raise for the troops, as the Defense Department requested.

To help offset the negative impact of the automatic spending cuts on the military readiness, Levin said the committee found $1.8 billion in budget savings and efficiencies. That money was shifted into other accounts for all the services in an attempt to restore flying hours, steaming days, unit training and essential depot maintenance.

The committee rejected the Defense Department’s request for another round of military base closings, Levin said. Before any domestic base closings will be considered, according to the committee’s bill, the department has to complete a report on which overseas bases can be shuttered.