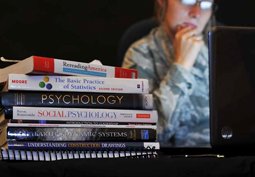 Due to the recent governmental budget cuts, the Army, Air Force, Marines and Coast Guard have eliminated Tuition Assistance programs (and it’s expected that the Navy will soon follow).  Students who are currently enrolled in classes under TA programs won’t be affected. New students looking to earn a GED, technical certificate or college degree will have to put their military-funded plans on hold.

Nearly 9,000 supporters have signed the petition at change.org pushing for the restoration of funding to military TA programs.  Comments on the petition website reveal that programs such as these are huge motivating factors for many people to join the military.

Some service members still qualify for education assistance through the G.I. Bill; however, these cuts could potentially affect these qualifications as well.

In the meantime, look to private funding opportunities such as grants and scholarships. Online distance learning programs are another option because they have significantly lower tuition costs and fees (and transportation costs) than traditional four-year universities. Taking two or three classes at a time will also cut down on tuition costs, instead of taking a full class load. Prolonging the program will allow more time to pay for tuition costs.

Do you know of other TA alternatives?