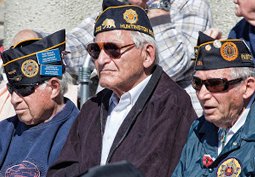 We recently came across an amazing post by someone with the online name Bloglongong. He writes a blog called Military Defence Technology  that has some great entries. He makes some eye-opening points about what we should be aware of when speaking with a Military Vet. We often want to express our gratitude and sincere respect, but there is a line that can easily be crossed. Here’s what he has to say:

As a career Army officer, US Army Ranger, and combat amputee, I find that a lot of people go out of their way to thank me for my service. One woman observed the Purple Heart license plate on my car and walked all the way across a parking lot to express her appreciation – with tears in her eyes.

After all these years, I still don’t know how to respond to those compliments. Finally, I’ve settled on a simple “Thank you for your appreciation.” When introduced to a vet, many people offer such a comment, and many have a tendency to “say something more” after the vet responds. Here’s where the trouble begins because simple curiosity can sometimes cause you to say the wrong thing.

Because military people have been trained to hide their true feelings, many vets won’t let you know that a comment has hit a nerve. Others, of course, will let you know in a flash that you’re out of line. It’s easy to make such a mistake, but as practitioners of diversity we know the importance of addressing people whose experience is different from our own.

Here’s a list of the Top ten things not to say to a military veteran.

1. “Did you join the service because you couldn’t get a real job?”

You don’t need to make assumptions about the reasons for enlistment. Lack of employment might very well be the reason, but most people sign up for reasons such as patriotism, training, and adventure. Some veterans enlisted or were drafted right out of high school. Others joined after college. You could find out what you want to know by asking, “Why did you enlist?”

2. “Weren’t you smart enough to avoid the infantry?”

Trying to be funny with this topic isn’t a way to make friends. Assuming that foot soldiers are intellectually inferior to others is a big mistake. Just ask, “What attracted you to the infantry?” If the person had no choice or if they had other reasons for being a “ground pounder,” they’ll let you know.

This gaffe can alienate combat veterans instantly. Many vets will be very happy for you, but volunteering the information sounds like “bragging” or “poor me, I didn’t get to go to war.” If they don’t ask about your service, you don’t need to make excuses.

4. “I wish I had served in the military. I feel like I missed something.”

If you know the veteran rather well, it’s ok to discuss this kind of thing. But telling a vet this at your first meeting is kind of like “crying over spilled milk.” The vet might well think, “Why tell me this? If you really wanted to join up, you would have. Don’t try to get me to alleviate your guilt or bad feelings.”

6. “Is it true you guys killed civilians?”

You already know the answer to this before you ask. Civilians get killed in war, but their deaths are unintentional. Asking this question means you’re getting ready to make accusations or that you already have a preconceived notion about the vet with whom you’re speaking.

Giving this information in the first meeting sounds as though you’re making an excuse about why you weren’t in the service, like “I didn’t go, but our family made a contribution.” Why would you bring this up in early conversations with a vet unless there is the possibility that they served together?

This can be a very touchy subject, especially if you don’t know the person you are asking very well. This question usually comes off as judgmental. How do you respond when you hear the answer; a big smile and compliments for a high-ranking officer? What if the vet had the rank of private? How do you handle that? It’s easy to presume that if you ask the question, you have formed an opinion about the vet based on the response.

9. “Well, I was one of the protesters back in those days (nervous laugh), but thanks for your service.”

You’re lucky if you don’t swallow some front teeth with this remark. The vet probably doesn’t care whether you were a protester, but throwing out the remark when you first meet the vet tells a lot more about who you are now than about who you were then. Your double talk comes across as another “better than thou” insult, like “Sorry you had to go (dummy).”