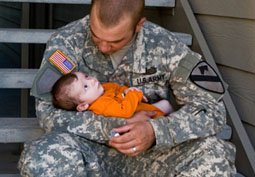 Alison Buckholtz’s book, Standing By: The Making of an American Military Family in a Time of War, is a very powerful reminder that the families of those serving are also heroes.

Americans need to understand the trials and tribulations of being a military family.  Through numerous interviews American Thinker has reached the realization that military families all have distinct differences and unique perspectives.  AT wants to thank all those who participated or were willing to participate.

Those interviewed wanted to make sure that Americans understand that military children are spectacular.  They are described by their parents as adaptable, independent, resilient, and maintaining a strong sense of patriotism.  Through their experiences they are able to view different cultures and values.  Yet as Sam, a “Mr. Mom,” told American Thinker, “all the people serving in the military volunteer, but their children are drafted.  They have no choice in this matter as to where they are relocated or how the serving parent is not there for different events in their life.”

It became obvious that children cope and react to their parent’s deployment in many different ways.  They are affected by their age, the type and length of the deployments, the support level, and how families are able to communicate.

Many of the younger children become clingy and react to the military parent as a stranger when he or she comes home for a visit.  A former SEAL’s wife stated, “My little girl cried every time her father held her.  She wanted Mommy.  I know my husband was hurt by this and felt rejected.  However, since he has been home, now it is all about Daddy.”

Other young children’s reactions range from adjusting well to doing poorly in school, and having emotional outbursts of crying, anger, and aggressiveness.  Angela, whose husband is an Army certified registered nurse, had to home-school her second-grade children because they refused to go to school when their daddy was away.  An Army lt. colonel noted that the longer the deployments are, the worse on the family.  He used to come home on a midterm leave for two weeks, but “when I left, the children’s emotions plummeted, grades got worse, and my wife had to deal with poor attitudes.  So my wife and I decided it was best if I did not come home until the deployment was over.”

An assistant Air Force chaplain described her ten-year-old child’s reaction: “She is afraid I will not come home and that she will never see me again.  I responded that I will try my very best but could not give her a 100% guarantee.  She bites her nails to a point that there are no nails left.  What seems to help is that we recently bought her an iPhone where she and I do face time together, so she can now see I am okay.”

A major in the Air Force Reserves also commented that he is having relationship problems with his sixteen-year-old daughter, who is currently shutting him out of her life.  She has been doing that since he was deployed in Afghanistan in 2010, even though he has been home for two years.  He attributes part of it to the fact that “my family knows that I have been in very dangerous places and worry that I am okay.  I only was able to have two fifteen-minute phone calls per week and I hardly had any time to e-mail.  I partially blame myself.  When I was over there, doing and seeing such horrific things, I had to shut myself off emotionally because I could not afford to lose it.  Sometimes it is tough to turn the emotions back on.”  He told American Thinker that his homecoming was a surprise to his daughter, and when she saw him, she screamed “Daddy!” and jumped into his arms.  He is having a hard time understanding what happened between “Daddy, I am so glad to see you” and “Daddy, I don’t want anything to do with you.” His wife explained that she thinks their daughter reacted to his withdrawal and numbness by making sure she was not going to be close to Dad anymore.  “She sees him as changed and is protecting herself emotionally.” He has not given up, and he is working with his daughter to repair the relationship.  He wants her to know that he loves her and is very proud of her.

The different ways parents chose to help their children cope ranged from having a deployed parent doll, buying a “flat daddy” (a life-sized printed poster), making “Daddy on a stick,” having a memory box/journal, or, for the older ones, talking about their situation.

There are also schooling issues, which makes a big impact on teenage children.  Dr. Vivian Greentree, a Navy veteran, a military spouse, and the current director of research and policy for Blue Star Families (www.BlueStarFam.org), said, “I do not understand why orders have to be cut in October, which affects the school year.  To make stronger military families, something the military does have control over is relaying new orders in the summer.  This would make it easier for families to relocate to a new community and allow the children to start school at the beginning of the school year.”

After being transferred and relocating, the assistant chaplain spoke of her son’s problems adjusting to the rigorous grading scale of his new high school, even though he previously was an honors student.  She asked for some consideration: “My son should not be penalized for my choices.  I was told by the school that no exceptions would be made for military children.”  When told about this incident, Dr. Greentree responded that forty-two states signed a contract allowing for adjustments for military children.  These contracts will ensure that rules are in place requiring schools to respond, make accommodations, and understand military children.

Dr. Greentree reported that more and more families are now “geobatching,” where children and spouses do not relocate with the serviceperson.  She noted, “My family has already moved four times, and I am not sure as a family we would move again, since my children are getting older and school is becoming an important part of their life.”  Another family interviewed has basically been apart for three years because they “geobatch.”  Their fifteen-year-old daughter, Stephanie, toldAmerican Thinker that she did not want to leave her friends and school in Georgia, and she is greatly appreciative that her parents decided to live apart when her mom was transferred to Kentucky.  The parents emphasized that they did it to make sure Stephanie has a stable lifestyle.

Dr. Greentree also cautions that children mirror the stay-at-home parent’s reaction, which is why endurance and flexibility were listed as the best attributes to have for the caregiver.  This can be seen through the eyes of three different spouses interviewed.  Tawana, a Navy veteran, understands the trials and tribulations of being a Navy spouse.  She has made it work by being very positive.  She makes a bucket list with her two boys, ages ten and seven, of all the exciting things they would do in their new home community, and she actively involves her children in sports programs to make new friends.  She and her husband make sure that he fits into the family schedule when returning home so as not to disrupt the children’s routines.  She agrees with Samantha, another military spouse, that open communication is very important, including using resources available, such as other military spouses or family support.

The former SEAL’s wife said re-integration was hard, since her husband tried to inject his rules on the family.  While she and the children saw it as intrusion, he saw it as trying to become a member of the family again.

Another spouse, Jessica, who has five children, including a special-needs child, appeared to be overwhelmed during the interview.  She felt that “it’s been a roller coaster ride.  I get really angry at times.  I have learned to do it alone.  It is a rough road and not very easy.  I miss him and want him to come home.  I am so frustrated and need him at home.  Of course, I don’t tell him any of this because I don’t want to worry him.  I do not rely on anyone but myself, because too manyfriends have come and gone, and I don’t trust others with my children.”

Alison, the author of Standing By, summarized it best: “Countless military children sacrifice a sense of personal security for America’s national security.  It is not perfect, but families endure because they know the deployment will end.  We are all in it together, and we become a team to get through this non ideal situation.”

The author writes for American Thinker.  She has done book reviews, author interviews, and has written a number of national security, political, and foreign policy articles.