The U.S. Army Has a Clothing Line 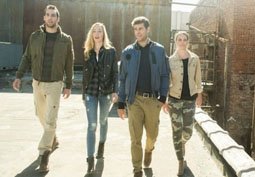 Earlier this week, a tip hit our inbox that we found very interesting: Clothing company Authentic Apparel Group announced that it is launching a contemporary collection of army-inspired pieces that is officially licensed by the U.S. Army. The line — which consists of only menswear as of yet — will initially be sold at Zappos, but the brand has plans to expand to other online retailers and brick and mortar stores in the near future.

We’d never heard of a U.S. Army-approved clothing line before, and that’s because there isn’t one. While the U.S. Army has an open licensing partnership with Beanstalk Group, Authentic Apparel is the only company in the apparel category that has been awarded a license to use its name and branding (needless to say, this is a pretty huge honor). A spokeswoman for Authentic Apparel told us that not only was the approval process extremely rigorous, every single one of the garments is green-lit by the U.S. Army to be sure they are up to standards. This means that the company literally works with the Pentagon to get the pieces approved individually.

The fall collection — which has been in the works for the last seven or eight months —  is very literally inspired by army gear, since Authentic Apparel wanted to honor and respect the years the military has spent fine-tuning its uniforms and bring that to civilians. The range includes classics like field coats and bomber jackets, and the details and tailoring are reminiscent of what U.S. Army officials wear.

Authentic Apparel plans to expand to womenswear soon, and is focusing on cause-marketing: Sales of this officially licensed U.S. Army merchandise will benefit the Morale, Welfare and Recreation (MWR) Program, which aids the lives of soldiers, retirees and their families.