The Science Behind the Art of Parenting 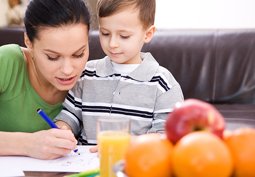 Today, class, we are going to talk about the science of parenting.

I know what you’re going to say: Parenting is far more art than science. But bear with me as I try to explain how the laws of osmosis and inertia play an unexpected role in the art of parenting

First, let’s tackle osmosis. For those of us who are more than a few years removed from high-school biology, osmosis basically is the movement of fluids from an area of greater concentration to an area of lesser concentration through a barrier. Think of it as roughly an explanation of why basements flood. (And before high school biology teachers take me to task, remember, it’s a metaphor.)

But osmosis also explains how the little parenting exercises that we perform in a seemingly endless loop suddenly yield results. See, children are empty vessels. They are, by definition, the area of lesser concentration. What we expose them to, bit by bit, drip by drip, fills them up.

Those nightly prayers said by rote in a bored voice? One evening, they yield a profound conversation about the nature of heaven. Those endless hikes in the woods, pointing out the first buds in spring or the rush of fall colors? One day your child will remark, “It’s great we live in a place with so many trees; it’s really pretty here.”

If your kids roll their eyes when you play classical music in your house, consider what happened to me recently. I stepped out of the shower and heard strains of Vivaldi coming from the den; I thought I had left my iPad on. What I discovered instead was my 17-year-old son writing a morality term paper while listening to “Four Seasons.” I tried to hide my excitement as I asked him, “So, do you like that music?” His response: “It’s much better to study to than the Beatles.”

Osmosis can be an agonizingly slow process. I first played classical music for my children when they were in utero. It was 17 years later when I had confirmation that osmosis was actually taking place.

Now consider inertia. Inertia gets a bad rap. We think of it as the reason that nothing gets done. In fact, inertia is the tendency of an object at rest to stay at rest or an object in motion to stay in motion unless an outside force changes that.

Let’s be honest, kids tend to be in motion a lot more than they tend to be at rest. And if they are on a good trajectory — if they are basically nice kids, if they are doing well in school, if they seem largely happy — we, as parents, need to acknowledge that Isaac Newton was right. By the principles of inertia, they will continue to be nice kids, do well in school and be happy in life unless some outside force, some really big outside force, changes that.

Yes, bad things can and do happen to kids, and sometimes we, as parents, need to be that outside force. We need to give a swift kick to help them accelerate or put out a restraining arm to slow them down. But we also need to respect the trajectory. We need to stop waiting for our kids to go off the cliff.

In our house, we’re moving into that stress-filled phase of life that involves preparing for the SAT and ACT, visiting colleges, writing college essays and filling out applications.

I will, no doubt, lose sleep over test scores and GPAs. I am, after all, a mom. But I hope that when I bolt awake at 2 a.m., I will remember to take a deep breath and remember the two scientific principles of parenting: osmosis and inertia.

What parenting tips have you found to be helpful?