The New BlackBerry 10 is Released 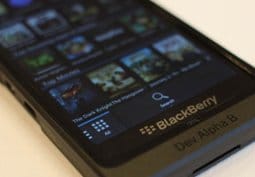 RIM may have trouble luring in buyers for its BlackBerry 10 devices, at least based on the results of a new poll.

A healthy 47 percent of consumers were intrigued by certain features found on the new BB10 phones, according to a poll from mobile app developer Bite Interactive. But only 13 percent would consider buying one, and just 1 percent plan to get one right away.

Specifically, one in two of those polled said they definitely would not buy a BB10 device, while one in four said they’re unlikely to buy one.

So, which BlackBerry 10 feature caught the most attention among the folks surveyed?

RIM’s time-shifting camera was the most popular among 16 percent of those polled. This feature lets people take multiple shots in a single picture and then choose the best one from an overall composite image.

RIM’s new predictive keyboard tries to learn how people type to offer better suggestions. This feature proved the most appealing to 6 percent of the respondents. And “Flow” helps users more easily navigate and multi-task among different apps, yet only 1 percent of those polled found it the most compelling feature.

One key to the success of BlackBerry 10 will be the number of apps available.

RIM is stocking its BB10 store with a greater number and variety of programs but is still a distant runner-up to the likes of Android and Apple.

“The key chink in RIM’s armor remains its apps ecosystem,” Joseph Farrell, Bite’s executive vice president for operations, said in a statement. “RIM has made great efforts to catch up with iOS and Android in this regard, but it, like Microsoft, is likely to find this far easier said than done. A lot of eyes will be on the new BlackBerry World from day one, as its success is pivotal to that of the BB10 devices as viable mainstream consumer handsets.”

Still, with the iPhone and Android devices so firmly entrenched among consumers, RIM faces severe challenges with BB10 no matter how appealing some of its features and apps may be.

“RIM’s challenge is compounded by the fact that Google and Apple have already built up huge mobile user bases who, for the most part, have invested lots of time and money learning and using their platform of choice,” Farrell added. “To switch to any new platform, even between the two, means a new investment of time and resources that many do not wish to spend, let alone taking a perceived risk on the new BB10 platform, no matter how impressive some of the new technology is.”

Conducted by YouGov between January 23 and 25, the online poll drew responses from 1,127 adults in the U.S.