The Invisible Wounds of War 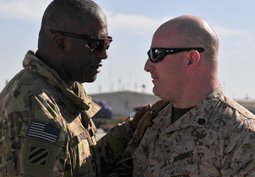 KANDAHAR AIRFIELD, Afghanistan – Two Marines and seven soldiers injured during combat operations traveled to several locations in Afghanistan, including Kandahar Airfield and Camp Nathan Smith, to see the progress being made in the country that changed many of their lives forever.

Prosthetics and scars are physical reminders of the sacrifices services members make nearly every day in the ongoing War on Terror. What can’t be seen, are the mental and emotional scars endured by the brutal lessons of combat that can be as debilitating as a missing limb.

Through Operation Proper Exit, an initiative of Feherty’s Troops First Foundation which provides support for wounded warriors injured and medically evacuated out of theater, service members who are capable of returning are afforded the opportunity to see the progress first hand and exit the country again on their own terms.

Of the nine service members visiting with OPE II, Marine Corps Staff Sgt. Glen Silva is the only one on his second trip with the organization. Silva suffered an above-knee amputation of his left leg, along with several other injuries, Oct. 12, 2010, when he stepped on an improvised explosive device in Helmand Province, Afghanistan.

Silva describes the event as frustrating, “I started yelling at my men to set up a perimeter as I tried to get up. I remember getting mad at myself because I couldn’t get to my feet and I didn’t know why.”

That’s when one of his Marines jumped on top of him to keep him from moving, and the reality of the event started to set in.

“I started to assess myself and as I looked around I could see my leg about 20 feet away,” he said. “I closed my eyes for a moment and told myself to remain calm. I opened my eyes and calmly told my Marine to start applying tourniquets.”

Silva’s recovery at Bethesda National Military Medical Center wasn’t certain at first. His heart stopped on one occasion, and he recounts the episode by saying, “Kill me or let me live, I don’t want to put my daughter through this.”

The faded silhouette of his daughter at his bedside set his mind to live.

After numerous surgeries, physical therapy and being fitted for a prosthetic leg, Silva is doing everything he can to get the most out of life.

“I live life to the fullest and I make the most of what I have,” he said. “I still ride my Harley and I still jump out of airplanes. Every day is a new challenge and I wake up happy every day.”

For retired U.S. Army Sgt. Brian Flemming, Kandahar Airfield is a mere 7km from where a vehicle borne improvised explosive device detonated three feet from him.

“When I awoke in a ditch on the side of the road in Kandahar, Afghanistan — burned and bloody — and thought my life was at its end, I asked myself two questions,” Flemming says on his website. “What did I do for others? Did my life matter?”

“That suicide bomber was the best thing to happen to me,” he continued.

The blast left Flemming with 2nd and 3rd degree burns to his hands, neck and face. He spent 14 months at Brooke Army Medical Center recovering from his physical, emotional and mental wounds. What he discovered while there is that there is no such thing as a mass produced solution.

What he has concluded is that, “Post-traumatic stress is an individual event, everyone deals with it differently. Familiarity breeds contentment. Help someone get to a place where they can discover their own answers.”

This statement is what drives Flemming to help other injured service members every day. He reaches out through his website and public speaking. According to his website, to date, he has personally mentored over 1,000 combat veterans from the War on Terror in the areas of business, marriage and family, how to effectively battle post-traumatic stress, faith and resiliency.

Resiliency was a common theme among all nine wounded warriors on this trip. Regardless of the severity of their physical injuries, each one repeatedly echoed how important it was to stay connected and remain positive always moving forward.

“Everyone sees my prosthetic hand, but most don’t know that I was also shot in the leg,” said Petry. “My leg gives me more problems than my arm. Coming back here has really helped me. It’s twofold — it helps me and I can take what I’ve seen and experienced back and share.”

During a discussion with Silva about the mental recovery of injured service members, he stated that staying connected and not losing a sense of who you are remain the two largest factors to successfully move forward with recovery.

He went on to explain the hardest thing about the process is not having a sense of being.

“Your place at the dinner table is taken away,” said Silva. “You’re treated as a patient instead of a Marine, soldier or service member. The doctors would call me ‘Mr. Silva.’ One day I looked at one of them and told them ‘My name is Staff Sgt. Silva.’”

He also offered two pieces of advice when working with wounded warriors.

“Support from the unit is vital, they are your family. Don’t be afraid to approach a wounded warrior, that’s how they learn (to deal with their injury) and don’t treat me like a patient.”