The Hidden Strengths of Military Wives 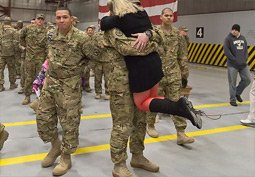 Rebecca Yarros, whose debut romance, Full Measures, is out now, loves a man in uniform (literally). And she’s the woman who stands behind him …

Rebecca: Men in the military are an incredibly popular archetype for romantic heroes, but have you ever thought about the women standing beside them, holding down the home fort?

The first time I saw my husband in his dress uniform, I was a goner. There’s something incredibly sexy about that uniform. It implies strength, pride, dignity, and the kind of man who puts the needs of others before his own. It fits my husband perfectly. I was lucky, because having grown up in a second-generation military family, I kind of “knew what I was getting into” when I fell in love with a soldier at 19. Almost 18 months later, 9/11 shook our world and war soon followed. We went from honeymoon bliss, to our first pregnancy, to our first deployment within 10 months. I sobbed, rocking our 5-week-old son while Jason was in the air, headed into Iraq in early 2003. But no one prepared me for the phone call, six months later, notifying me that he’d been seriously wounded by an anti-tank landmine, or the following months, draining his wounds of infection, pulling pieces of shrapnel from his skin, and praying his cornea would heal.

It takes a strong woman to love a military man.

Military wives are some of the strongest, bravest women I have ever known. I stood in awe of both my grandmothers, having supported my grandfathers through WWII, and my mother, who wore her BDUs with pride, matching my father rank-for-rank. Strong military wives are what hold military marriages together. When soldiers go to war, life doesn’t just pause on the homefront. It continues at a snail’s pace, dragging by while everything conceivable goes wrong with the house, the kids, the car … you get the idea. We know our soul mates are going through hell, and there’s nothing we can do for them but wait and send kick-butt care packages. Military spouses send their loves to war, knowing they may never get them back. I’ve never seen such grace under pressure or such kindness, as I have from other military wives, and when I’m at my weakest, there has always been another spouse to lend me her strength.

Military wives have a unique skill set. If you need to know exactly how much can fit into a flat-rate box? Ask a military spouse. We’re awesome at care-package Tetris. We can send an entire shelf-stable meal, bake a cake in a jar, and write a good, old-fashioned love letter, all between getting the kids off the school bus, taking them to hockey, and minding our own careers.

Along with strength comes flexibility. Spouses may groan at another PCS (move) when we haven’t yet unpacked the boxes from the last, but we do it. We’ve handled it solo, kids and all … three times … if our husbands are needed elsewhere. We leave our family and our friends, and we make new ones at our next duty stations, maintaining friendships all over the globe. We may write our friends’ addresses in pencil in our address books, but we put their names in pen. We don’t believe a homecoming date until we see our husbands, because we know nothing is certain in the military. We bend with moves, training exercises, and deployments, building loves strong enough to withstand the storms, and fitting the pieces back together when they walk back through our doors. We’ve learned to bend, because we refuse to break.

To stay strong, we keep occupied during deployment. I graduated college during Jason’s third deployment, and wrote my debut novel, Full Measures, during his fourth. Because the characters endure my biggest fear, the knock at the door, I had to walk away from the manuscript the month he deployed. Once he began flying missions again, I was back at the computer, writing away my sleepless nights. As is true with a lot of big events, Jason was deployed when I signed my book deal with Entangled, but I was able to surprise him over Skype, and we celebrated together. And the best part? He came home a month to the day before it published, and swept me into his arms to tell me it made its first bestseller list. He is always worth the wait, worth being strong for.

Find out more about Rebecca and her books at http://www.rebeccaelizabethyarros.com/. You can also check out her blog, The Only Girl Among Boys, voted the top military mom blog the last two years.